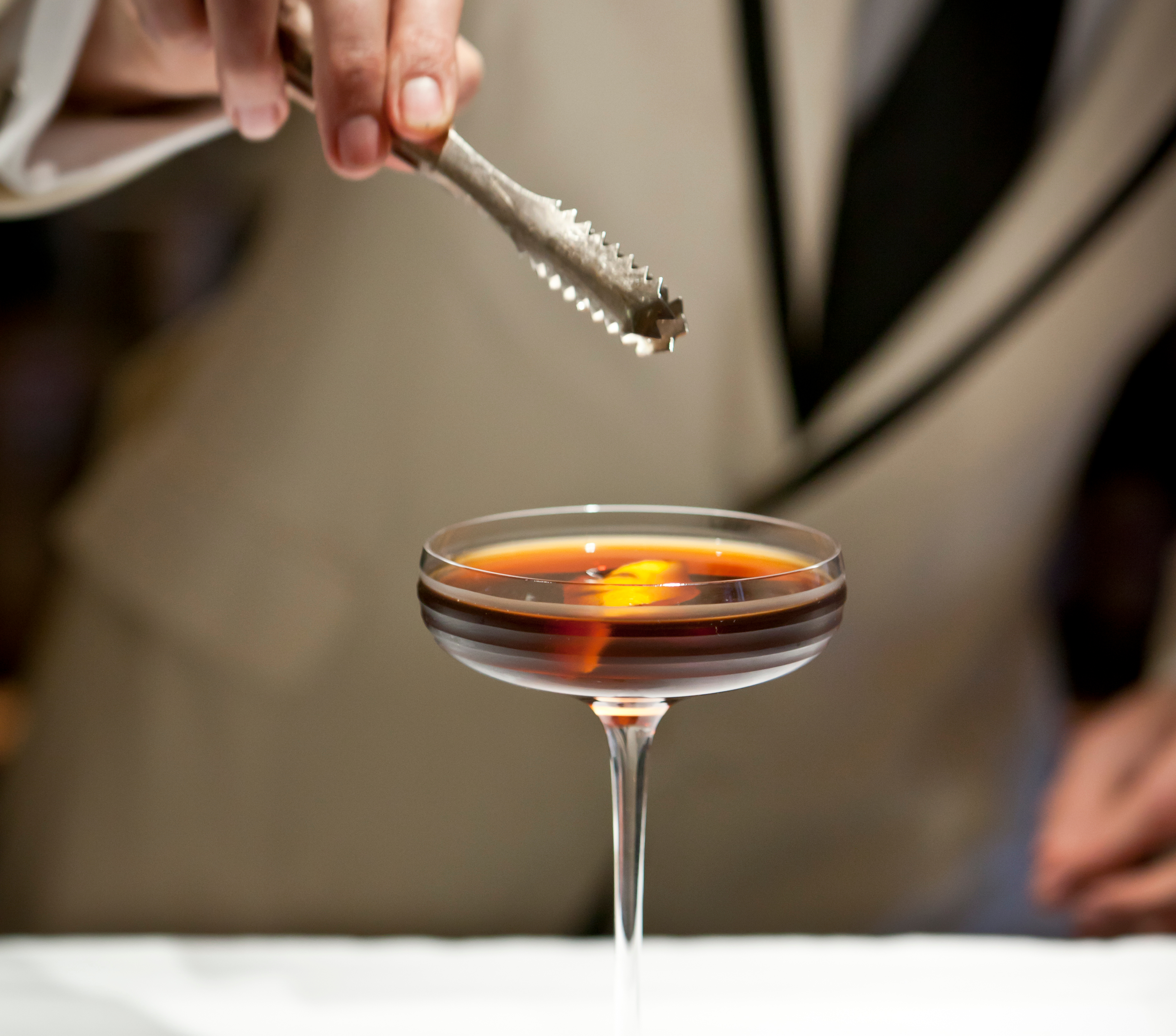 Like the classic song, gin cocktails and The Savoy’s American Bar are a duet that have proven a hit over countless decades

Inspired by the famous Frank and Nancy Sinatra song Somethin’ Stupid, the 10th cocktail on the current American Bar menu is a cocktail duet. Called the I Love You, the serve mirrors the relationship between gin and one of the best bars in the world – historic, playful and fully designed to remove your inhibitions.

To step through the Art Deco-inspired American Bar at The Savoy, like Sinatra did so many times, is to step through a room of liquid history. Opened in 1893, it is said to be the longest-standing cocktail bar in the world. It is certainly one of the most awarded, most recently winning World’s Best Bar in two prestigious competitions: Tales of the Cocktail, Spirited Awards in 2018 and World’s 50 Best Bars in 2017.

Traditionally, ‘American bar’ was the name given to a bar serving American-style drinks (what we would now describe as cocktails) in the 1800s. Two centuries on, the American Bar remains old school; libations are delivered around the Art Deco room as resident pianists tinkle the ivories. “It’s as much a piano bar as a cocktail bar,” muses director of bars Declan McGurk. In modern definition, however, the American Bar at The Savoy must be the most famous ‘American bar’ in the world.

A bar is only as good as its drinks, and the American Bar’s menu is juniper forward. From the classic cocktails made famous in The Savoy Cocktail Book – more than 50 per cent of the recipes contain gin – to those created by current teams for each new menu, and even vintage cocktails made with spirits from decades past, gin fans will have plenty to discover upon visiting.

Once, menus at the American Bar were largely concerned with the classics that had made the hotel famous. However, in 2017, a now-iconic partnership between McGurk and (at the time) head bartender Erik Lorincz directed a shift towards innovation. After all, when so many classic cocktails are well known the world over, it seemed a wasted opportunity to include them on the menu of one of the world’s best-known bars. And so, inspired by stories from the bar, the duo created a new menu designed to engage their guests in a new way. It worked – not long after, the American Bar was named number one in the World’s 50 Best Bars list.

The cocktail menu that you’ll find in the bar today is the result of months of work by the team. “We first start by thinking about what our guests would appreciate, and from there we select the right theme,” explains current head bartender Maxim Schulte. Titled The Savoy Songbook, it takes inspiration from the baby grand piano which sits in the centre of the room and the unique ambience created by the resident pianist Joe Nickoll.

From past menus, Schulte remembers the popular gin-based First Impression, a combination of Bombay Sapphire, yuzu wine, St Germain elderflower liqueur infused with white pepper and a champagne cordial. Stirred like a gimlet, it was created by past bartender Dominic Whisson for their menu Every Moment Tells a Story, celebrating the photographer Terry O’Neill, whose work now decorates the bar.

Other than the menu, I’d argue that a trip to the American Bar is incomplete without a martini. Having tried gin martinis in bars across the world, the ones stirred up by the team here are among the best. Crisp, silky smooth and beautifully aromatic, the key for Schulte is simplicity – balance, with the right vermouth – and The Savoy is lucky enough to have its own. “We use our own Cocchi Dry Vermouth and our own bitters. The ratio of spirit and vermouth for us is important and with the second batch of our vermouth we had to adjust the recipe.”

Gin fans checking out the selection on the back bar will find a carefully chosen collection to suit the diverse tastes of customers. “I like to have most of the classic gins like Plymouth, Tanqueray and Bombay Sapphire,” says Schulte. “The other gins are then selected to be special and unique, for example Schrödinger’s Katzen Gin from Germany or Boatyard Gin from Ireland.”

For those looking for a totally unique gin experience, you can explore the bar’s vintage cocktails – but check the prices with the bartenders before you order! These cocktails are created with vintage spirits – it currently has vintage Gordon’s and Booths on offer – which can be mixed into a Hanky Panky, White Lady or Negroni. With the Booths no longer in production, it’s a chance to taste liquid history. Schulte, who has the task of sampling the vintage gins to determine which cocktails they should feature in, explains what to expect: “They are a bit more smooth after all these years, so I guess there has been some evaporation. But the gins were definitely produced differently than today; the flavour is exceptional, I think.”

For many young bartenders, their first experience of the American Bar and The Savoy will be through the world-famous Savoy Cocktail Book, written by Harry Craddock in 1930 and considered to be one of the first books to catalogue cocktail recipes. With more than 700 recipes listed, from the well-known to the forgotten classics and the downright bonkers, they were just some of the supposed 2,000 recipes that Craddock chronicled on index cards during his time behind the bar.

One of his most famous creations, the White Lady, was adapted from a recipe by Harry MacElhone and remains a favourite to this day. It is said that Craddock buried a White Lady cocktail in a flask in one of the walls of the American Bar when he stepped down as head bartender, a hallmark of his for years to come. While other flasks he hid at The Dorchester were discovered decades later, the flask hidden at the American Bar has never been found, even during its refurbishment in 2010.

American Bar alumna Ada Coleman remains the most well-known female bartender of all time. Not only is she the only female to hold the head bartender role, but during her tenure from 1903 to 1926 women weren’t often seen in the bar, let alone behind one. Her gin-based cocktail the Hanky Panky is still extremely popular, according to Schulte. “We have many guests that come to try our version, and sit at the bar just for that one drink.”

With all this history around them, Schulte and his team still focus on old-school hospitality. “I find all my interactions with our guests special,” he says. “In the end this is the reason that I love my job.” This is why many, including myself, love the American Bar. There is something quite special about pulling up a bar stool and being made a gin cocktail by a team who understand the gravitas and the history around them, who are passionate about leaving their own legacies through the cocktails they create and the memories that they help their guests to forge. Memories that couldn’t be spoiled, even by saying somethin’ stupid like “I love you”.

0 comments on “Saying somethin’ stupid like I love you”