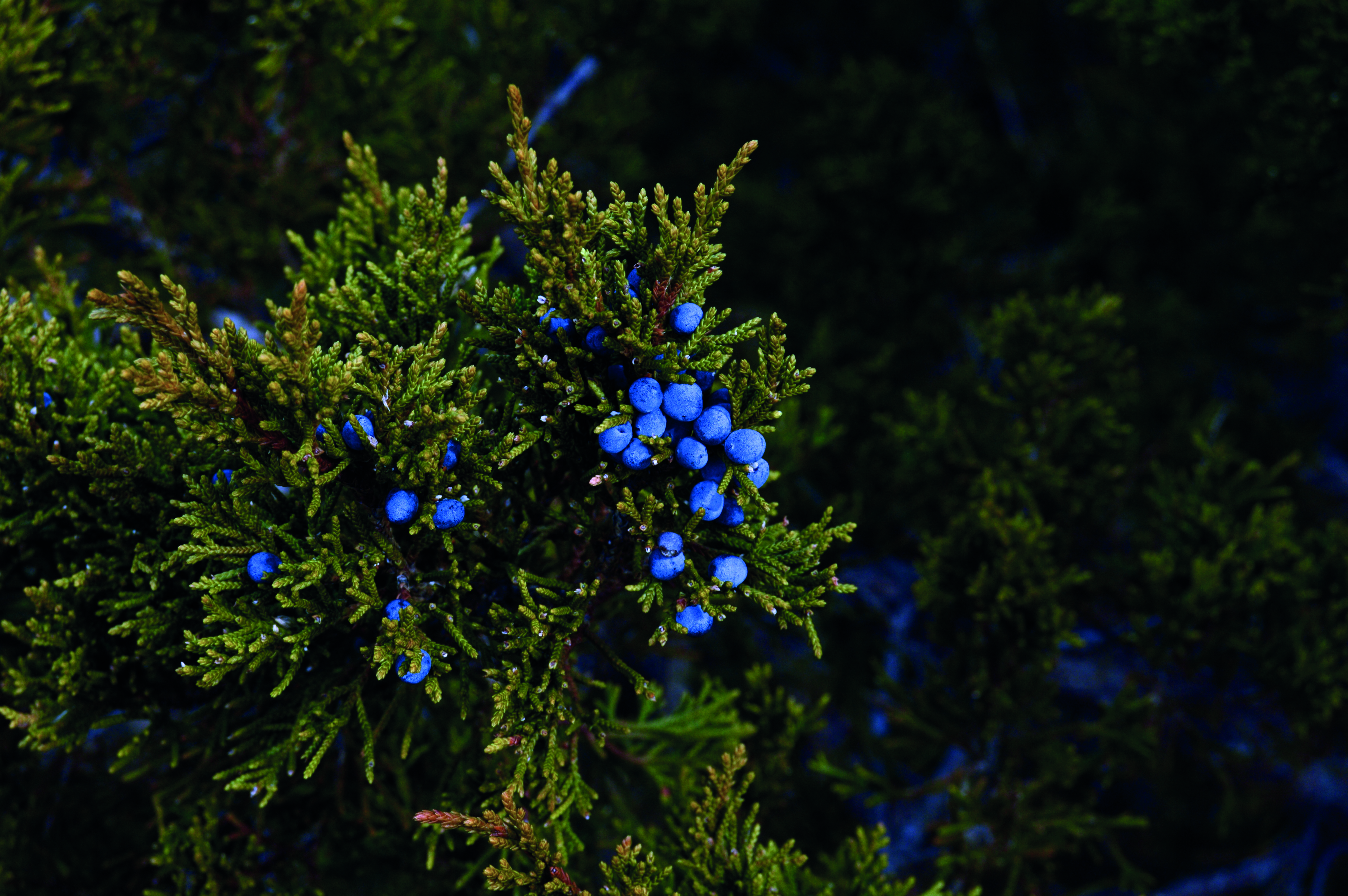 The art and science behind gin’s biggest star

We keep discussing the same topics, whether life, love or politics, but the terminology at our disposal is always evolving as newcomers compete with the existing line-up: ‘on trend’ as opposed to ‘fashionable,’ or ‘curated’ rather than ‘selected’. These terms are repeated in the mainstream, while other innovations are confined to select circles. The gin community, for example, refers to gins that deliver a distinct juniper character as ‘juniper forward’.

However, juniper has a particular status as gin regulations stipulate that “the taste is predominantly that of juniper”. The most familiar source of juniper is Italy, particularly Tuscany and Umbria, though various European countries including Macedonia, Serbia, Kosovo and Albania also provide a home for it. Being adaptable and resilient means that whether the terrain is woodland or rocky, it’s of no consequence to juniper. The annual schedule sees bushes flowering from January to April, with the colour of the flowers being significant. Yellow flowers indicate a male plant, while green are female. Their union is facilitated by wind, transporting vital male components to pollinate female flowers, which subsequently develop into berries. Initially green, the berries turn blue, purple and black as they mature over 18 months.

Berries are gathered from the wild by experienced collectors between September and January. Harvesting requires a selective approach as juniper bushes bear berries at different stages of maturity – some are ready, others will be ready for the following harvest. To detach the former, but not the latter, branches are agitated by gloved hands and a stick. Collectors deliver berries to a local processing house, where dust and loose needles are removed by blowing air on them, while triple-sifting sorts the berries into small, medium and large sizes. Berries are subsequently dried to reduce the moisture level from around 24-32% to 16-18%. This is vital, enabling storage for two to three years without the risk of micro-bacterial growth. There are two drying methods: ‘natural’ air drying, which is traditional at Xoriguer, where juniper berries arranged in open boxes spend two years in ventilated warehouses; or utilising hot air, which dries the berries in a far shorter time.

Tommy Haughton, director of botanicals supplier Beacon Commodities, says, “Hot air at around 35-45°C is channeled at various angles to dry every part of the berries. The key is to gently remove moisture from the surface of the berries, not the centre. Drying lasts four to five hours, followed by a rest period of around four hours, when remaining moisture emanates from the centre of the berries to the surface, and then there’s a further four to five hours of drying. It’s vital not to ‘cook’ the berries or dry them too quickly, which makes them shrivel and risks damaging essential oils as well as tainting the flavour.”

Dried berries are packed in hessian sacks, which offer the advantage of withdrawing and absorbing any remaining moisture from the berries while also maximising air circulation. This is how juniper berries arrive in the UK, with each hessian sack containing 25kg. UK suppliers such as Beacon Commodities deal directly with collectors and processing houses, as well as distillers who can specify the drying method and country of origin.

“We traditionally source juniper berries from Italy, predominantly Tuscany, which are naturally air-dried, and this is a vital part of our house style,” says Joanne Moore, master distiller at G&J Distillers, owned by Quintessential Brands Group. Specific origins inevitably raise the question of terroir, and how influential this may be. As juniperus communis is the variety used for distilling gin (some other varieties are toxic) this enables direct comparisons.

“Wherever juniper berries are sourced from they contain the same range of flavour compounds, though these can be at different intensities depending on the terroir. I place more focus on how the berries are processed after the harvest, particularly drying, rather than the terroir,” says Tommy Haughton. On arrival at a distillery juniper berries are shown straight to the lab, where the level of essential oils is checked. “Essential oils are made up of many different flavour compounds, though it’s several key compounds that provide the typical juniper character, including camphor, citrus, floral, herbs, spice and sweetness,” says Joanne Moore.

Each botanical contains a range of flavour compounds, from lighter to richer, which become volatile at different temperatures and stages of the distillation run. The ‘spirit cut’ (see Gin Magazine issue one) enables the distiller to select the desired range of characteristics from the medley on offer.

Meeghan Murdoch, operations manager at Eight Lands Organic Speyside Spirits, says, “Heavy, oily, slightly rubbery pine or turpentine notes come over at the beginning of distillation, which are discarded as the heads. We start collecting the spirit cut when citrus notes appear – these are lemon, lime and orange, combined rather than appearing separately, together with lighter pine notes, which then lead on to rooty, orris notes. When the spirit shows more earthy, mushroom notes we stop collecting the spirit cut and move to tails, which are discarded.”

While each botanical is renowned for contributing an individual note, that doesn’t mean one botanical has an exclusive claim on any particular flavour. Joanne Moore says, “There is some overlap between botanicals. Citrus notes, for example, are of course derived from lemon peel but can also be present in botanicals such as coriander and juniper. Each of these botanicals contributes citrus with slightly different nuances, and they combine to create a rounder and broader range of
citrus character.”