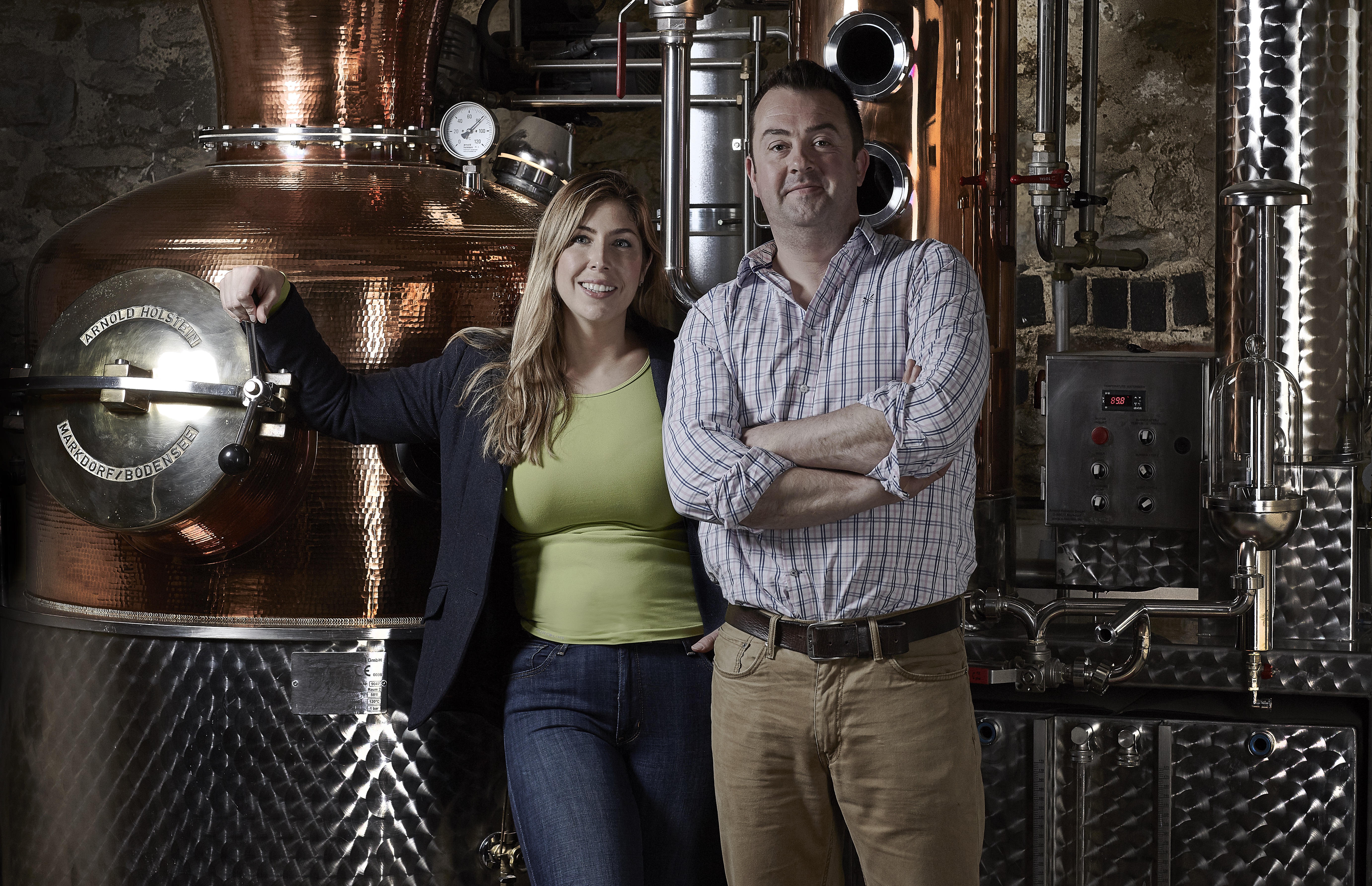 Tom Warner explains to Sam Coyne the inspiration behind his brands

Flavoured gin is here to stay. If you’re looking for one of its pioneers, you could do far worse than speaking to Tom Warner of Warner’s gin. We get to know Tom and his brand a little more after another jam-packed year.

Tom, can you tell us a little more about yourself, what you do currently with the company and your background?

Tom Warner. The name’s on the bottle and I’m now probably seen as a relic from the start-up days of the business. I guess I’m a walking personification of what we do as a business and there are not many parts of the business that I don’t touch on on a daily basis. I wear a lot of hats, but that’s entrepreneurism for you.

You initially start as a producer where you create fantastic liquids, but over time you have to do a lot of other different things. As time goes on, I suppose you have to specialise slightly and the conversations you have as a business-owner evolve.

Starting a business is the most amazing and horrific thing you can do. I have to cover ‘master distiller’, but I’m dubious of anybody who calls themselves that without having done the qualifications – and I haven’t.

“We want to reconnect people to what’s real. It’s a fast-paced world out there and everybody is very stressed.”

The industry is full of people who call themselves master distillers now; which is unfair on those who genuinely are in that category. For me, you can only call yourself a master distiller if you’ve fulfilled everything in the spirits industry and done it for decades. We’re lucky amateurs who focused on quality.

When we came into the business, we stripped it back to the basics. The gin industry was dominated by multi-national businesses that engineered their products over decades. We gave focus to small amounts and used the best ingredients, best processes and best equipment.

The number of people who say I inspired them is fantastic. It’s good for the industry, although the gin category is crystallising and it is getting harder and more aggressive. It’s flattering though, but all we did was go on a journey. The fact that it’s been seen as inspirational is kind of cool in a way though.

We want to reconnect people to what’s real. It’s a fast-paced world out there and everybody is very stressed. Many people bite off more than they can chew and it’s a systematic problem. Hopefully, we can produce small moments of solace for people where they can step back, unwind and connect with their friends over a great drink.

You’re a household name now, but for those who don’t know your gins, can you tell me a little about them?

I think in certain households we’re a name, but not everywhere yet. Our flavoured gins you can trace back to my mother. It was one of her recipes that inspired our Elderflower Gin, the first of that flavour at the time. The farm’s covered in elderflower.

It took us in a certain direction as a business. We make three London Dry gins, but it’s our flavoured expressions that most people will know. Rhubarb Gin changed the category – it’s a category in itself and has become quite noisy. We got offered a really cool deal with the Crown Estate in Lincolnshire – it’s Royal rhubarb! We’ve outgrown that supplier now due to demand. We just thought, “That’s very British!” We’re a farm-born brand and if you look at all of the flavours that we produce, they are very British. We don’t use flavours that we can’t realistically grow in the UK or aren’t associated with British agriculture. That gives us our flavour character.

Recently we won a sustainability award, beating the likes of Budweiser, which is nuts. Money from sales of Honeybee goes to the Royal Horticultural Society who work on pollination projects. We are growing wildflower meadows and putting solitary bee hotels in pub gardens all across the country. So, instead of putting a poster up in a bar, let’s do something that’s good for the world.

The new Raspberry Gin was a limited-edition that we made for the local beer festival. People went mad for it. Travel-retail then asked for it as an exclusive so we did that, before the pub chain Greene King asked if they could have it. It snowballed from there. It’s the quickest growing gin we’ve ever launched. It’s now in Marks & Spencer’s, Waitrose and Tesco.

Lemon Balm Gin was bought from our botanical gardens on the farm. We are up to six acres now and; they produce flavour for us so we don’t have to import flavours from all around the world and two; it also creates a habitat for pollinators as well. So you end up with an awesome symbiotic relationship between flavour distillation and the environment; all happening on the farm.

Nearly all the gin in the world is made using dried botanicals and you can make it year-round. For us, we only distil certain gins in May, June, July, August and September and then we have to have made enough for the winter, otherwise we will run out.

Can you talk us through your production method at Warner’s?

We start with one of our three London Dry gins. For example, our Harrington Dry. It’s aromatic, there’s orange spice and when it launched in 2012 it was a real revelation for gin. Our Elderflower Gin starts with a bases of Harrington Dry. We make it once a year using fresh elderflower – that means no synthetics, flavourings and we’ve got three weeks to make a year’s supply. If it runs out, that’s it and we wait until the following year.

Rhubarb Gin is a third rhubarb juice. The gin comes off the still at 81% ABV and we then cut it back to a bottling strength using rhubarb juice. Again, no flavourings, no syrups and we buy 400 tons of rhubarb to make that gin. It’s mother nature at its finest. I reckon it’s probably the hardest gin to make in the UK.

Honeybee Gin has 27 botanicals; root ginger, blue cornflower petals, hibiscus, chamomile and some lavender stops it getting soapy. We put citrus in there to freshen it up. There’s a large amount of grapefruit on the palate, then fresh lime, quince and sage, which is also the best garnish for that gin. We add honey at the end of the distillation, including some from our beehives. Not exclusively from ours as we don’t produce enough, but it does all come from Northamptonshire and bee-farming friends locally.

For the Lemon Balm Gin we pick and distil the botanicals on the day which is just so unique and amazing in terms of flavour. The Raspberry Gin is made in the same way as Rhubarb Gin, using juice to cut the gin down to eventual bottling strength.

How do you serve your new Raspberry Gin?

In a cocktail you’ve got a Clover Club without the need for more raspberries. It’s also great with Champagne. If you want to do an interesting long drink I recommend serving it with a lemon tonic.

Is there anything we should be keeping an eye out for?

We’ve just joined forces with Joules to create a gin with pears and apple and there will be our Christmas Cake seasonal edition to look out for. That uses leftover sloes from our Sloe Gin, we put them back in the still with some citrus peel, some Christmas spices, additional juniper and then distil the spirit into something fruity. This year we’ve aged that in barrels with cherry juice and it ends up tasting like Christmas cake. Last year we did 700 bottles initially and it sold out in 30 hours. This year we have more – it’s epic.

Normally I’d say to anybody, “Don’t put any of our gins with coke”, but I have to admit I’ve been mixing this with Fever Tree’s Madagascan Cola. It also works in an Alexander cocktail.

Seriously though, don’t let anybody tell you how to enjoy your booze. If you want to drink any of my drinks in a certain way, with coke or with a different garnish, just give it a go. If you want to try a parsnip garnish, give parsnips a whirl

0 comments on “What’s your Flavour?”