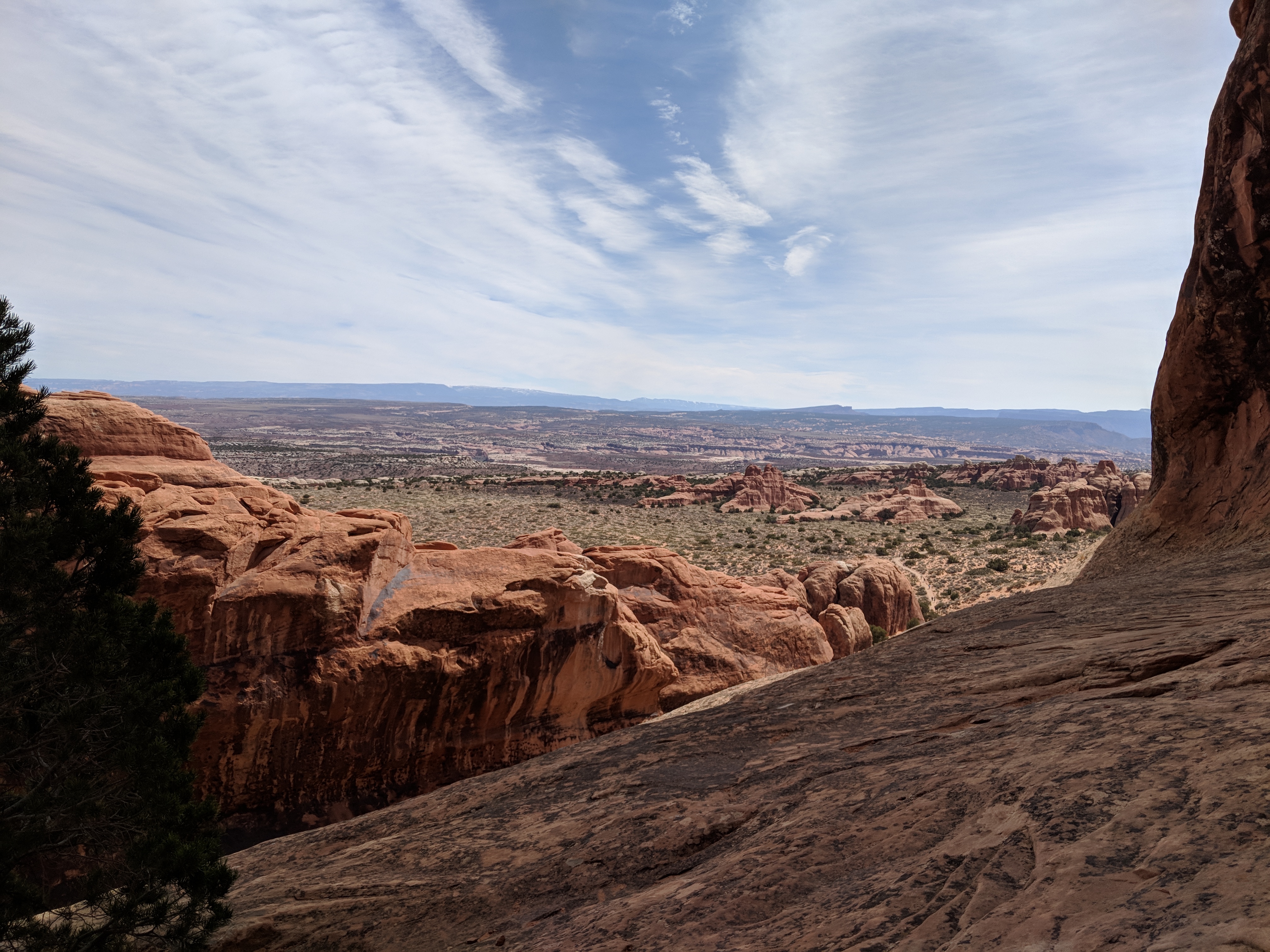 “If I had the power… I would blow out the brains of every thief in the territory, and I despise the whiskey-maker more than I do the thieves.” Brigham Young, the founder of modern-day Salt Lake City, the first governor of the Utah Territory and the second president of the Mormon Church had strong words for spirits producers. And he would know – he was a whiskey distiller himself. That’s even though the church specifically forbids
drinking alcohol.

Religious persecution of the church’s first president brought Young and his followers to Utah. In 1846, Joseph Smith, founder of the Church of Jesus Christ of Latter-day Saints (or Mormon Church for short) was killed by a mob in Illinois in 1846. Young and the church did not see a future for themselves back east. One year later, 143 men, three women and two children headed west for a place that they thought no one else wanted – the stark arid saltscapes of Utah.

The land is rocky and covered in desert, mountains, salt flats and canyons. Vast swathes of the state receive less than 12 inches of rain per year. It’s far from an ideal place to grow food, raise animals or start a society. But the Shoshone people called Utah home. The Ute people called it home. The Ancestral Puebloans called Utah home long before Young or other European settlers arrived.

70 per cent of the state today is owned by the US government and it includes some of the country’s most famous national parks: Bryce Canyon, Zion and the famous Arches National Park, home to the Delicate Arch, attract millions of visitors a year.

Although today there is a booming tourism industry, Utah was founded by the Mormans, a religious group that shuns alcohol consumption. Therefore, they enacted some stringent laws regarding liquor consumption, many of which persisted until very recently. Until 2017, bartenders had to prepare cocktails behind so-called “Zion Curtains”, frosted glass panels that kept consumers from seeing the people preparing their drinks. Until 2018, restaurants were required to have a sign that said “not a bar.”

Even today, restaurant liquor licenses specify that less than 30 per cent of total sales can be from alcohol.  In other words, there are many reasons to think Utah is an unfriendly place to open a distillery.

Photographer turned lead distiller, Chris Barlow doesn’t buy that. “For good or bad, Utah is home. I’m not going to relocate all our family someplace else and start up.”

When Beehive Distilling opened its doors in August 2013, it was the first gin distiller in Utah since 1870. But complex national laws posed more of a problem to the team. “Most of the local issues we had were with building codes and the like of that… There wasn’t a distillery in our city for 100 plus years so the fire department and building code people just needed some education about what the code actually is for distilleries… And assurance that we’re not going to explode.”

The distillery was founded by three friends. In addition to Chris Barlow, there’s Matt Aller, who is an advertising and brand-agency guy with a love for all things Salt Lake City and local. Erik Ostling migrated from Alaska to Utah and also runs a photography studio downtown.

The birth of Utah Gin

Beehive Distilling’s flagship Jack Rabbit Gin began out of pragmatism. Chris says, “We all love whiskey, but that’s a really hard one to jump into – unless you’re making a white whiskey that nobody really drinks, or just buying someone else’s whiskey and pretending you make it yourself.” He adds, “None of us liked either of those two scenarios… you either make vodka or gin.” As creative people, the answer seemed obvious. “So gin was it.”

The straightforward botanical bill is by design. “As marketing guys, nothing sounds more hokey than touting the huge number of botanicals,” Chris said, and “all you can pick are four or five anyway.”

The processing of the botanicals is split between a combination of twenty-four hours maceration (crushed juniper berries, coriander, orris root and grains of paradise) and vapor infusion in a gin basket.

“Especially for the fresh [lemon] zest I found that it really lost that freshness you get in a nice cocktail when we soaked it….  this was very true with the rose as well. Macerating it just killed the lightness and fresh scent.”

All of this happens on an 80 gallon column hybrid still that Chris described as “more of a franken-still.” Chris says, it’s “cobbled-together, not really a name-brand type.”

Despite the inclusion of bold, contemporary botanicals like rose and sage, Jack Rabbit Gin is grounded in tradition. The recent marketing material proclaims firmly, “Juniper is King.”

Chris says that this was intentional, “When we were tasting a lot of gins as we were working out our recipes, we would come across these gins that where just lemon or all anise, but no gin flavour. And we just thought that they shouldn’t even be called gin.”

“So, we wanted to make sure that juniper was represented in ours.” He added for clarity, “now, it’s not a hit-over-the-head ‘all juniper’ that we have. It’s much more balanced, but we definitely wanted it to be a flavour that’s present and not hidden.”

While Jack Rabbit Gin does lean more towards contemporary in style, with the sage and rose providing a lot of flavour, Chris is right. Even classic gin fans will have no difficulty discerning the clear juniper notes.

Rabbit in a Barrel

Beehive Distilling expanded their gin product line shortly after launch and released the first barrel-aged gin made in Utah (perhaps the first ever).

“Gin – yeah in the summer… but no one drinks gin in the winter. We need a brown spirit for sitting around the fire on cold snowy days.” The team had already written off whiskey in the short-term, so they needed something else. “I was able to get four used Chardonnay barrels from a friend’s winery.” So, they got into their car and drove over a thousand kilometers to pick them up.

As many gin distillers have discovered over the years, making a barrel-aged gin isn’t always a simple as just getting a barrel, waiting and bottling. The team struggled with how to balance the vanilla and warm oak tones you get from a longer ageing process, with how to retain the volatiles that make gin taste like gin. Many of those molecules like pinene, linalool and limonene are extremely volatile. The longer you leave a gin to rest, the fewer of those that will remain.

They experimented with different time in the barrels. “We found using the old stuff lost much of the gin flavour… it just turned into a weird whiskey.” Currently the gin that enters the barrel isn’t their off-the-rack Jack Rabbit Gin, but instead an “extra-strong blend of seven botanicals.” But that wasn’t enough. “We pull the barrels apart and [re]-char them in-house.”

When making a whiskey, distillers can choose from a wide range of techniques and charring times. For example, a #One char is a mere 15 seconds of fire on oak. More common in both American whiskey and other barrel aged gins that use a new barrel is a #Three char, where the wood is charred for 35 seconds. It’s this process that turns cellulose in the oak into the wood sugars that lend some Bourbons notes of toffee and rich brown sugar. Wine barrels and Chardonnay barrels aren’t usually charred, but instead, merely toasted.

Therefore, a Chardonnay barrel straight from the vintner will have more tannins. Beehive Distilling’s approach is not only fun, Chris says gleefully, “I get to burn stuff” but also, “We think that the wine in the barrel and the fresh char marks it a unique gin.” With their re-assembled and re-charred barrels, they combine a four-years-aged gin and a one-years-aged gin. The result is vanilla, warm spice, big juniper and a modicum of smoke.

When Jack Rabbit Gin was designed, the thinking was, “Everyone wants a local product and when you’re the only local gin you get traction.” By late 2019, Chris said, “Jack Rabbit gin is the third best-selling gin in Utah – behind Bombay and Tanqueray – so I think it’s been a great ride in Utah.”

The future is bright. While, “the big change is just room… we [now] have space to do new things.” The team is experimenting with ready-to-drink cans based on the current range of spirits. Under the Desolation Distilling label they’re working on a Gin and Tonic and Gin Rickey. Chris talks about new spirits, gins, and maybe the team will get around to following in the steps of Brigham Young and make Utah-distilled whiskey.

0 comments on “Stirring the beehive”