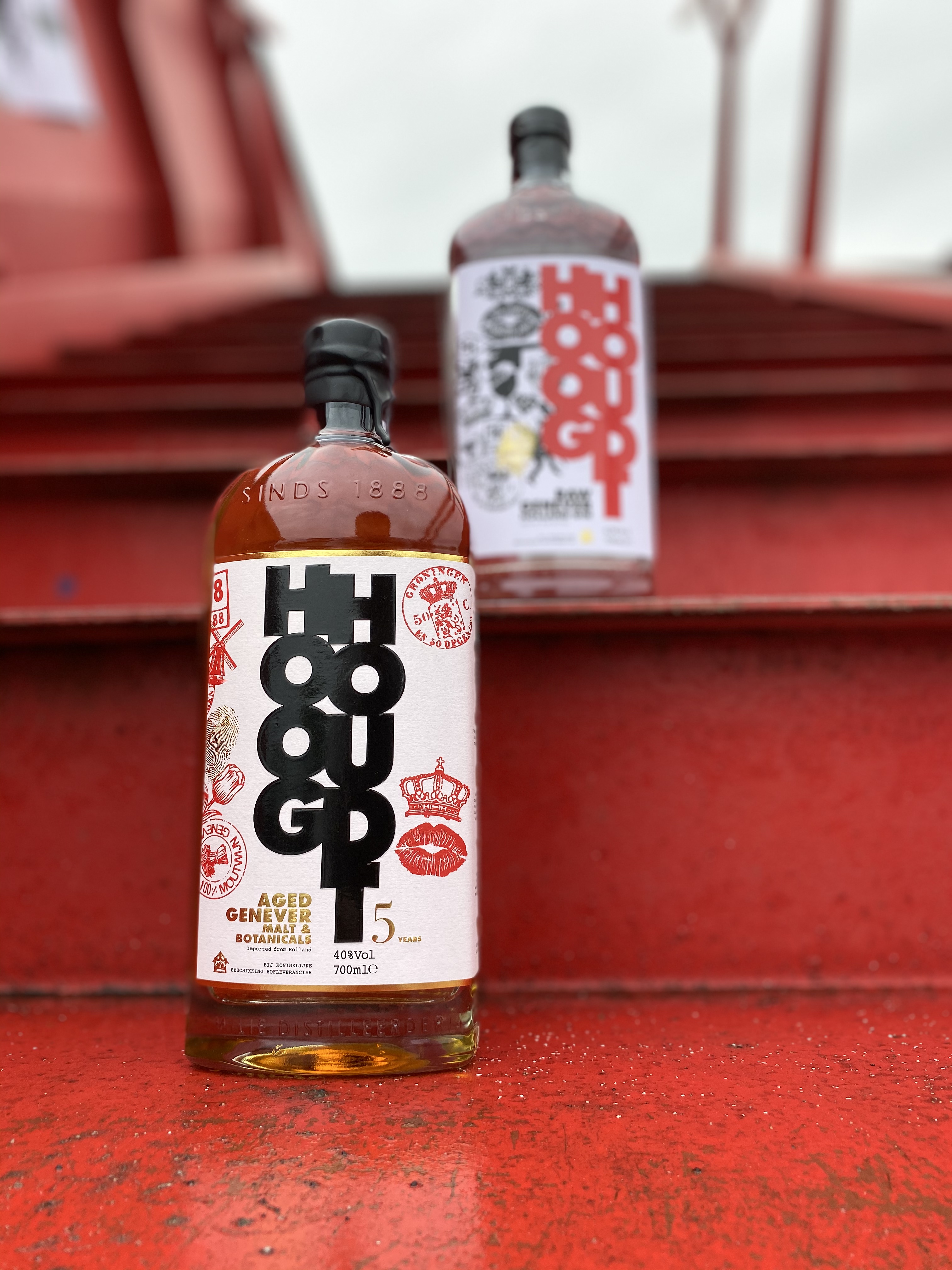 It’s a lofty goal to reinvent something that has been around for over 500 years but Dutch producer Hooghoudt aims to do as much with its new genevers. Presenting a RAW Genever and an Aged Genever, the goal is to finally leave the spirit’s granddad image behind.

The new genevers were presented during a launch event in the company’s hometown of Groningen, in the north of the Netherlands. Boldly titled ‘The Reinvention of Genever’, the event was held in a former sugar factory. Out with the old, in with the new. Where many brands embrace the former glory days of genever and try to get consumers to do the same, family owned Hooghoudt wants to kickstart a new glorious era for the iconic Dutch drink.

The new design from London-based design agency Michael Nash is aimed at the modern consumer, without denying Hooghoudt’s own heritage and bond the company has with the Netherlands. Both new products are hoping to answer a demand for the next big thing in the post-gin era.

Genever is a complicated category with many different designations such as ‘jonge’, ‘oude’ and ‘korenwijn’. Hooghoudt is trying to simplify their products by offering an aged and unaged version. The brief for Hooghoudt’s RAW Genever was to create a spirit that would hold up on its own but would also work brilliantly with tonic – a quality often lacking from genever.

Hooghoudt Raw Genever is a 100 per cent malt spirit genever distilled in copper kettles and created by blending four types of malt wine, each distilled from either barley, wheat, rye and a combination of the three. Botanicals such as juniper berry, cilantro, star anise and lemon peel give the genever a herbal and citric character. It should appeal to gin drinkers looking for a malty kick. Just add a garnish of lemon peel, and you’re set.

The Hooghoudt Aged Genever is likely to win over whisky drinkers. It traces its flavour origins to ex-Oloroso sherry butts from Spain. After the butts were emptied of their original content, they were filled with a malt wine distilled from wheat, corn and rye, which was left to age for five years. Only juniper berries have been added to Hooghoudt Aged Genever, which balances grain and flavours from the ex-Oloroso cask.

Arno Donkersloot, CEO of Hooghoudt says, “It’s not the first time that Hooghoudt takes the lead. We are ready for the 21st century. With these new expressions we believe we meet the demands of the marketplace and we will work tirelessly to once again earn genever’s place behind bars.”

Sipping delights for the festive season

Aged genevers are perfect companions for the cosy, wintery festive period – especially if they matured in former sherry or port casks. We’ve compiled three excellent examples to keep you warm and comfy.

Dutch botanical distiller Rutte presents the second in a series of four sherry cask matured genevers. Rutte Fino Sherry Cask has aged for six years in American oak casks previously containing Fino, a dry and white sherry wine. This rich genever is not unlike a well-aged whisky but has extra complexity because of botanicals such as juniper, coriander, orris root and liquorice root. The sherry adds nutty flavours.

The aged stocks of Dutch family-owned distillery Zuidam are among the most comprehensive in the industry. The 11-years-old Pedro Ximénez Cask matured genever is a prime example. Distilled from rye, corn and malted barley and flavoured with herbs like aniseed, juniper and liquorice root, this is rich but balanced – a perfect digestive.

Based in the genever capital of Belgium, Smeets produces original Hasseltse genever, a style protected by its own AOC. All Hasseltse genever matures for at least six months in Hasselts territory. The maturation in Porto Cruz barrels takes a total of 12 months and gives the Port Cask Finish a balanced, dry and fruity taste, highlighted by a touch of raisins on the palate.

0 comments on “Hooghoudt’s reinvention of genever”