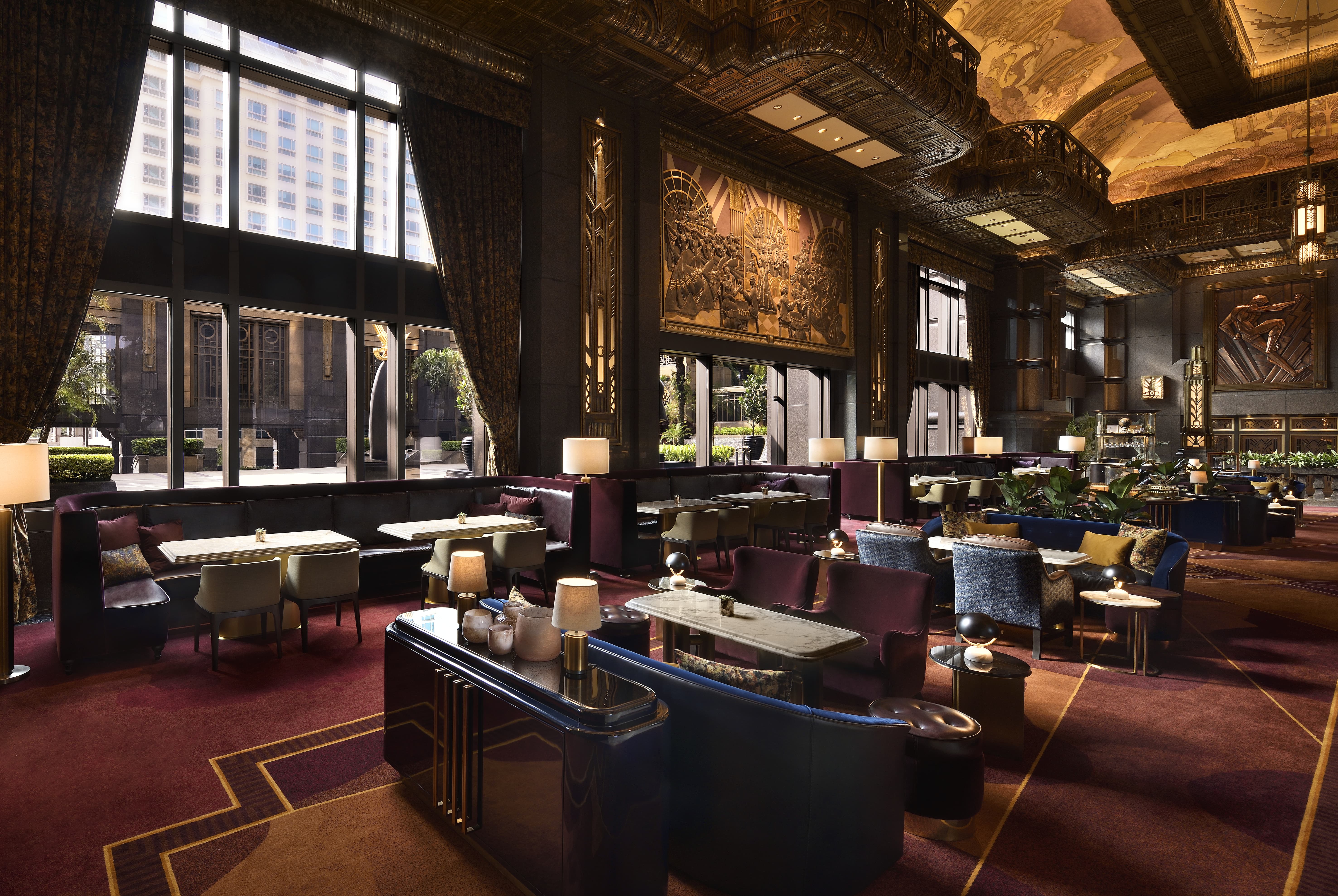 When I meet Jesse Vida, he admits to being a little jaded, having just worked the notoriously hectic Singapore Cocktail Week. The event’s name would suggest that the festival lasts a ‘mere’ seven days, but in a city that rarely serves up half measures, naturally it rumbles on for twice that and then some.

A reoccurring theme of my trip was the name of one bar being on everybody’s lips. It isn’t a new name to me, because its reputation extends far beyond its country’s borders. It’s just reassuring to know that the locals regard it with the same reverence as everybody else. That bar is Atlas.

Situated in Parkview Square, Atlas Bar forms the centrepiece of a sprawling ground-floor plaza within a towering Art-deco building. It opened in 2017 and head bartender, Jesse Vida joined in November 2018. His CV presents him as a natural partner for Atlas’ ambitions. A native of San Francisco, USA, Vida stumbled into the bartending world in 2007, when he interviewed at one of chef Elizabeth Falkner’s restaurants in town. He was thrown in at the deep end and told to turn up on the coming Monday wearing the appropriate gear.

By going through each role, Vida developed an understanding and passion for hospitality and then knew for certain that he wanted to nurture that through bartending.

Even in the grand surroundings of Atlas, his appreciation for service remains a core value. Vida says, “As bartenders what we do is hospitality. We need to remember that. Most people get it, but every now and then I see some bars around the world where they’ve let that slip. You see people sitting at their own bar, admiring the cool concept they’ve got and drinking their own ‘cool-ade’, while guests are sat there waiting. The most important people are your guests.”

These days the best bartenders seem to constantly travel the circuit and Vida is no stranger to life on the road. After “getting comfortable” at the restaurant, he upped-sticks from San Francisco to New York, where he joined the famous Dead Rabbit team in 2013. From there, he remained in the Big Apple, but joined the up-and-coming Black Tail. With Dead Rabbit renowned for its Irish whiskey collection, Black Tail famed for its sipping rums and classy cocktails, and Atlas’ own focus on gin and Champagne, is it merely a coincidence that Vida’s name seems to be a consistent thread among the most prevalent drinks categories of the moment?

Following a guest shift at Singapore’s Seminar in January 2017, Vida returned to New York with a sense that he had found somewhere in Singapore with a truly unique bar scene. Vida made contact with Proof & Co., one of the leading drinks and spirits companies in Asia-Pacific, and quickly realised that his vision was aligned with that of Atlas’ owners.

Today, under Vida’s stewardship, Atlas is inspired by the 1920s Art-deco movement. Stepping inside the plaza of Parkview Square, you conjure up visions of parties hosted by Jay Gatsby, such is the decadence and splendour. Despite the focus on gin and Champagne, it serves all number of spirits, making use of Vida’s background across drinks. His style fits the ambience, “Each cocktail scene is slightly different, similar to a place’s culture. New York taught me the classics and good-technique. I try to bring this to Atlas. I think I’m the first American head bartender in this market. Around here there are a lot of green bartenders. I believe you need to stir 1,000 martinis before you get it right. I still do a lot of service here, but I also make sure I’m supervising and testing the others when serving drinks.”

Singapore’s diversity makes it challenging to really pin-point what its culture is all about. Vida has used this to cut a similar niche for Atlas. “We make the most of the European flavour around here and I have also added my own US influence.”

Vida’s an impressive figure and he intrigues me when he comes to talk about Atlas’ famous gin tower. “We have nearly 1,300 gins in the tower. But that’s barely scratching the surface of the number of gins out there in the world.” On this point, Vida insists that Atlas has certain expectations of the gins that can be found in its tower. ‘We like to see the classic style and production. There won’t be anything in the gin tower with an ABV lower than 40%, other than a few sloe gins – those with lower ABV are liqueurs. The gins we use should have very few essences, although this part isn’t the strictest.”

A glance around the gin tower and the selection is more than formidable, with the usual suspects gracing the shelves, through to others you might not expect to find in this part of the world. As a local to the South West of England, it was a pleasant surprise for me to see Caspyn Gin near the front.

With so many gins, it’s imperative that Vida and his team host regular tastings for staff so that their knowledge is second-to-none. So frequent are these tastings, in fact, that they happen most days. A new menu, Interbellum, was launched at Atlas by Vida in August, celebrating the Art-deco period, but the cocktails on offer will maintain their emphasis on quality classics, not surprising perhaps, with Vida calling himself a “negroni and martini man.” Vida says, “We have gins from 48 different countries and starting at the 1910s, there’s a martini for each decade.”

“At Atlas we want to be leaders in the education of gin. I’m essentially the unofficial gin tour-guide here”

Alongside the tower of gins and cocktails, Atlas also runs its own Juniper Society. The society is a social membership community, with exclusive access to Atlas’ gin collection. Workshops among the society educate members on the tasting and production of gin, with presentations often led by distillers from across the globe. Every first Tuesday of the month, the society hosts ‘Juniper Tuesday’. Often sold out, these sessions are led by a member of Atlas’ gin team, which includes Vida, master of gin Jason Williams and gin researcher, Jonathan Teo.

Vida explains, “At Atlas we want to be leaders in the education of gin. I’m essentially the unofficial gin tour guide here.”

It’s with this in mind that Atlas acts as a meeting point for gins across the world. Vida talks about gin with a clarity sometimes lacking in others, while the cocktails on the Atlas menu deliver the best of classic and contemporary flavours, allowing the gin to speak its story among the other ingredients. While Singapore is a celebration of the many communities within its borders and a meeting point between East and West, Atlas is a triumph of all that is good in the world of gin, particularly as the collection in the gin tower continues to grow. Indeed, Vida suggests that we are likely to be seeing more Asian gins, including several from Singapore itself, both behind the bar at Atlas and on our own shelves soon.

Vida will be travelling the globe in the coming months doing a number of guest shifts at bars as he delivers the Atlas brand to new areas. He firstly speaks positively about the growing strength of bars in Singapore, “We’re a tight food and beverage community. There’s a rising tide here, but it’s good for all and is bringing new influences.”

London and the UK rightly shouts about its role in the gin world and is seen by many as the forefront of gin and cocktails. But, with Atlas leading the way, Singapore is the perfect hot spot for all of gin’s many manifestations to meet – and Jesse Vida and his team will make sure that it’s done with class and flavour.

Combine all ingredients in a mixing glass, add ice and stir until ice cold. Strain into a chilled Martini glass, perfume the drink with pomelo zest before garnishing with a lemon twist.

Shake gin, vermouth, sloe gin, pineapple syrup and lemon juice together. Double strain into a Champagne flute and top up with Champagne. Garnish with toffee hazelnut chocolate chip and serve..

0 comments on “Gateway to the world”