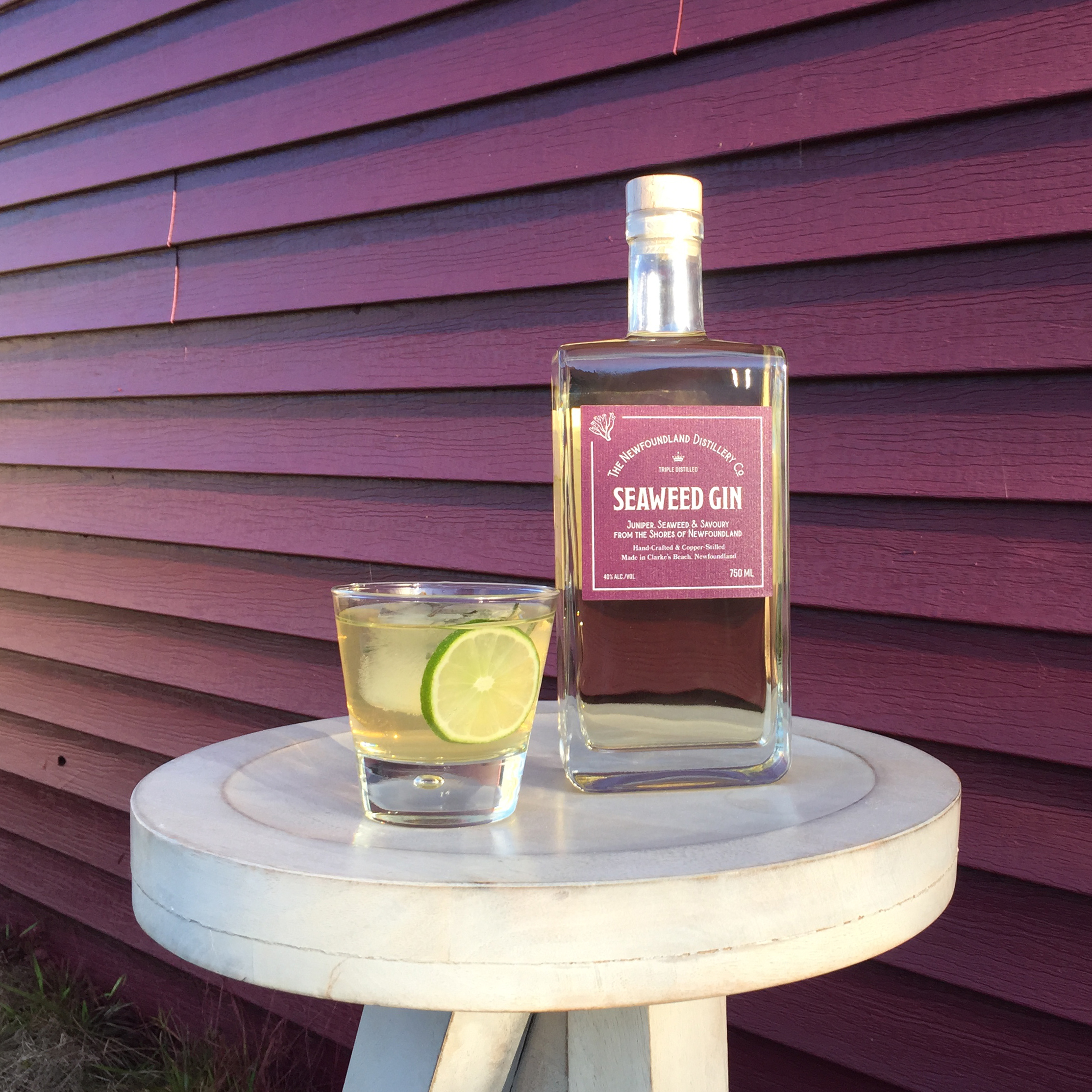 Distilling gin on the coast of Newfoundland

Around about one thousand years ago, Vikings exploring the east coast of Canada found grape-like berries and fermented them into wine. They named the area “Vinland” and built a tiny settlement, now called L’Anse Aux Meadows, on the northwest tip of Newfoundland. Historians believe that they made their base camp in this location because the weather was so much milder than at home in Greenland. Today, the carefully restored settlement is now a National Historic Site.

The Vikings abandoned L’Anse Aux Meadows within a decade and nobody is sure why. We visited and can hazard a guess. It was Canada Day, July 1. The sun was high and Davin and I were bundled in thick jackets – protection against the frigid winds blasting in off the sea. It’s so frosty at L’Anse Aux Meadows that the Viking burlesque show is watching Hildred weave extra layers. It takes an extraordinary person to put up with what Mother Nature throws at you up here.

On top of that, Vikings covered their homes in turf. It’s cold enough outside to freeze seawater and your spouse is nagging you to mow the roof? And we know why they used to set their base camps on fire before moving on. Anything to get warm before heading back to sea. This probably explains why the gift shop didn’t sell matches.

If the Vikings had only known that Newfoundland was also rich in seaweeds, juniper and other gin-making botanicals, there might still be plenty of Leif’s and Erik’s walking about. Instead; it took 10 centuries for an artist named Peter Wilkins and Cordon Bleu chef, William Carter to make the province’s gin connection.

In 2017, they opened the Newfoundland Distillery Company in Clarke’s Beach on Conception Bay. They planned to make whisky just as Charles Bennet had done 175 years ago in his now-departed St. John’s flour mill and brewery. That takes time, so Wilkins suggested gin. Carter had returned to Newfoundland after a tenure as a chef in Ottawa, cooking for prime ministers, celebrities, US presidents and visiting royalty. The experience honed his approach to the culinary arts – making unpretentious seasonal ingredients pop on the palate. Gin was already in his wheelhouse.

To Wilkins distilling resembled some whale of an art project. When he watched the first alcohol dripping from the still, he saw drops of joy. The aesthetic and concept of spirits excite him. But is that because his artistic sensibility merges with the craft? Possibly.

“It’s about having a glass of something at the right time,” he tells us. “It doesn’t matter if it’s a gin and tonic or a pint of beer; there is a shared experience. That’s what I find fascinating. When you have the right drink at the right time, it’s absolutely perfect.”

Wilkins’ artwork hangs on the distillery walls when it’s not on exhibition in galleries across Canada. These visually engaging graphics blend precise colours with abstract shapes. As with Carter’s cuisine, Wilkins works simplicity into balanced layers. His Rock & Roll exhibition, for example, re-scales colours from iconic album covers and sets them within the frame of a vinyl record.

Applying this aesthetic to gin creates a similar experience for drinkers here on this “third stone from the sun.”

“If you’ve got good local ingredients, then keep it simple,” continues Wilkins. Their first gin was built on local cloudberries. In Newfoundland, every grandmother has a cloudberry jam recipe. Natural selection favours those who can preserve the berry past its short season. According to Wilkins, artists and chefs like a drink, so, rather than jam, they channelled their inner-grandma by preserving the cloudberries in a barley spirit which they use as a botanical throughout the year. “We try to use as little as possible and maintain that balance,” explains Wilkins.

Carter and Wilkins hand-forage the amber raspberry-like fruit in bogs near Placentia Bay, an hour away. Since cloudberry season coincides precisely with the height of mosquito season, “It’s only the hardiest pickers that can do it,” Wilkins claims, mentioning his daughters who braved the bites, returning with baskets of berries and more red bumps than a case of measles.

Carter’s recipe uses three botanicals in the distillery’s gin basket. He balances the tart and earthy citrus flavour of the cloudberry with wild savoury from the nearby Mount Scio farm, and Newfoundland juniper. “The juniper season is short,” says Wilkins. “The berries are small but concentrated. The quality is excellent.” After infusing the base spirit, he macerates the botanicals in it, boosting essential oils for balance and imparting a golden hue to the gin.

It wasn’t Newfoundland’s cloudberry that put the Distilling Company on the map. It was seaweed from the nearby Grand Banks.

Seaweed is the star of Seaweed Gin but juniper and savoury play supporting roles. “Early on, we decided to use what we could get locally and keep it simple. The hard part was working out the balance. How long do you leave the seaweed in? What ratio of botanicals? There was a lot of tasting to get the right levels,” explains Wilkins. The gin was worth the effort. A sweetness balances the brininess, fine-tuned by an earthiness that underlies the juniper flavours.

The Newfoundland Distillery Company overlooks Conception Bay where Vikings once sailed. It’s not Vinland anymore, but as the bay’s name suggests, the area is more populous than L’Anse Aux Meadows, and milder too. And it is not Viking wine that has swept the locals off their feet. It’s a botanical flavour tour of Newfoundland from the comforts of Clarke’s Beach – unofficially renamed “Ginland.”

The Newfoundland Distillery Company features prominently in Davin and Blair’s upcoming book, The Definitive Guide to Canadian Distilleries, to be published March 2020.