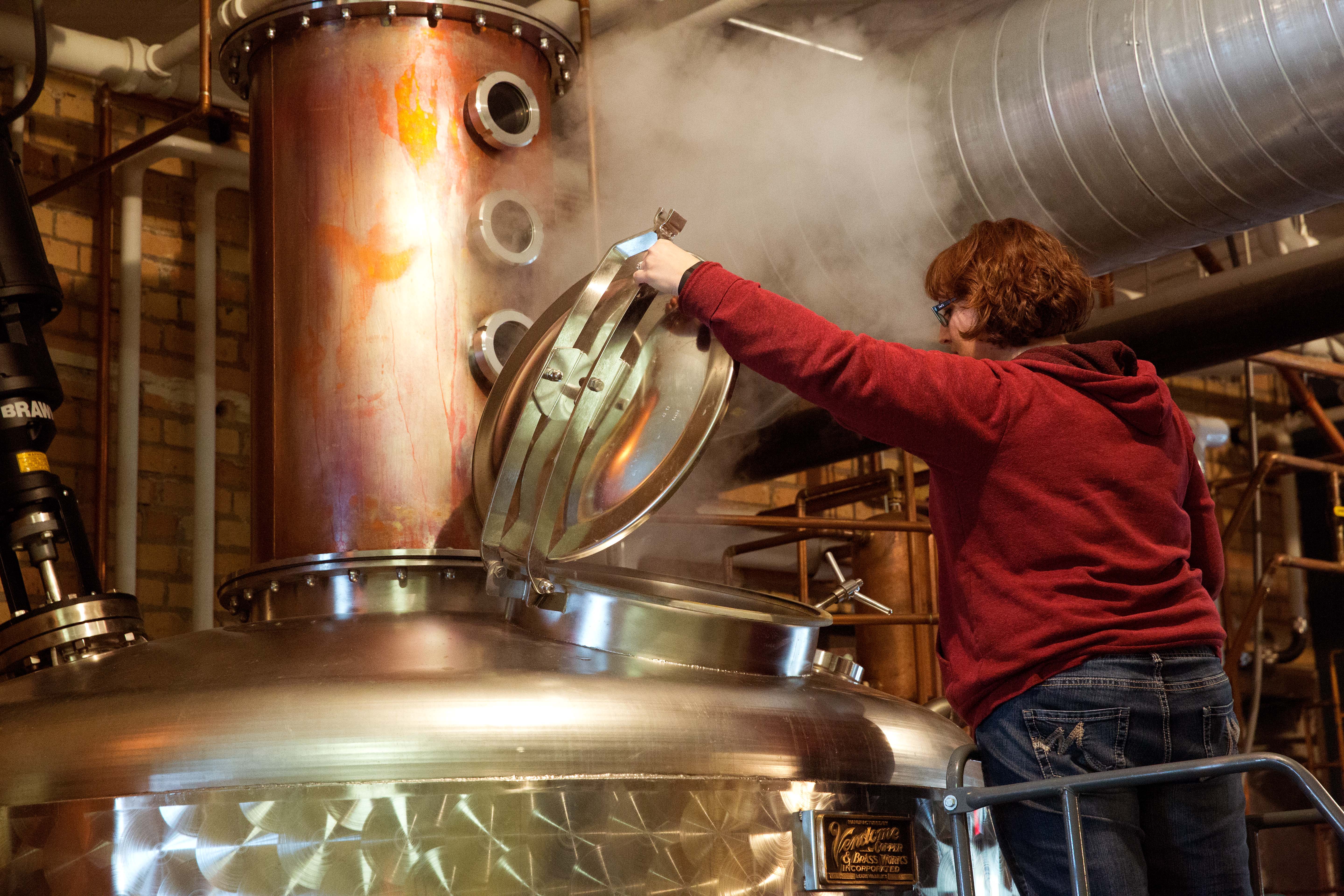 We visit a distillery taking inspiration from the great lake

“I grew up with the lake being emblazoned on my soul,” is how Emily Vikre describes the impact of her childhood in Northern Minnesota and how it inspired her and her husband to leave the East coast and found Vikre Distillery in Duluth, Minnesota. “It’s a pretty special place.”

The lake Emily speaks of is Lake Superior. It’s the world’s largest freshwater lake in terms of surface area. It’s the largest of the five North American Great Lakes and takes up as much area as the entire nation of Austria.

The city of Duluth is a relatively small port city on Lake Superior. With a population of just under 86,000 people, Emily laughs as she says it’s, “Pretending to be a city, but it’s really just people living in the woods.” Located on the fringes of North America’s vast boreal forests, it is rugged and cold; the weather is severe and it’s situated hours away from the nearest big city. It hardly seems to be a place that a young couple would pick up their lives and move to.

Emily elaborates, “The people who move here, they move here because they want to be here and they like that type of ruggedness, they like the landscape, they like the challenging weather. So the culture is pretty rugged and pretty woodsy.” The lake looms large as well in the lives of Duluthians, “The lake kind of influences and directs – whether consciously or unconsciously for people – a lot of what happens here.”

As of 2019, Vikre Distillery distils three gins, two aquavit and a handful of other spirits, including vodka, single malt whiskey and rye. All of these spirits trace their genesis, once again, to the lake.

“We felt like the lake was just sending up this idea so that we could just come here and be home. Here is this amazing water, it is mineral free…  It is this amazing resource and the only thing people here are doing to celebrate that this body of water is brewing.

Somebody needs to take it another step.” Emily and Joel were further inspired by the prominence of water sources in other brands’ marketing. Martin Miller’s gins speak loudly about the Icelandic water that they use for diluting, “This is water like no other, icy cold and alive.” Canadian Iceberg London Dry Gin melts icebergs that are over ten thousand years old for the water they use in their gin.

With Lake Superior water as their foundation, Emily and Joel went to work building up their distillery. Joel Vikre is the head distiller, and Emily playfully describes herself as “arbiter of taste.” The two developed the recipes for all of Vikre’s spirits, including the three gins they launched in 2014.

“Maybe it’s because my mother is a professional storyteller and folklorist. I was brought up with things coming in threes. And so, whenever I think of something that could have multiple expressions, I always gravitate immediately towards three expressions. That’s what feels right, balanced and a little bit magical to me.”

All three gins borrow heavily from the rugged boreal inspiration of Duluth, Minnesota.

Vikre’s Boreal Juniper leads with juniper at the fore. Its botanicals include lemon, orange, angelica root, orris root, coriander, fennel, cardamom, rhubarb and pink peppercorns. The botanicals are then split into two batches before distillation. Some are distilled via vapour infusion in a gin basket, and others are macerated in locally distilled organic corn neutral spirit. While Emily and Joel keep the exact division of botanicals close to the chest, she does add one process detail that helps dial up the juniper in their Boreal Juniper Gin. “We kind of chop the juniper berries lightly and we leave them in the [spirit] for a little while, along with rhubarb.”

Boreal Juniper is perhaps the most classic style of Vikre’s offerings. Piney, slightly resiny juniper is prominent early. Citrus and cardamom come on mid-palate while the subtle sweetness of pink peppercorns add a brightness to the finish.

Perhaps most unusually among the Cedar Gin botanical blend is sumac. Sumac is best known for its prominence in Middle Eastern cuisine. It has a distinctive maroon hue and imparts a citrusy, slightly lemony flavour to dishes prepared with it. Nearly halfway around the world, sumac grows wild in the temperate regions of North America. Emily recounts her childhood as the inspiration for this unusual botanical.

“It’s one of my favourite little childhood hiking treats. I learned from one of my friends in my second grade that you can suck on sumac berries and it has this tart citrusy flavour… so when I was thinking about the earthier, but citrusy flavours that I wanted in our Cedar Gin, [sumac] was just something that came to mind.”

Spruce tips are also incredibly seasonal. In the brief week where the spruce tips are budding, “It’s all hands-on deck for about a week and we pick.” That also means that Emily and Joel need to project how many tips they think they’re going to need for an entire year of production. “They actually freeze really well. Anybody who wants to use spruce tips for anything – including cooking, pickling or whatever – I think they taste better if they have been frozen and then defrosted. They concentrate the sweetness and the citrusy flavour that they have.”

The spruce is the star of Boreal Spruce Gin, with the aroma evoking fresh spruce tips and boreal forest. The palate is earthier with rosemary and lemon focusing the pine and juniper. Equipment wise, Vikre has two stills that they use for making their gins: a 1,000 gallon stripping still and a 250 gallon hybrid pot gin still. The latter has a gin basket and optional vodka column attachment.

“With our gin, we keep the backbone of a traditional profile so that it is gin, but then augment that with the flavours of the place.” Despite their different botanical blends and process distinctions, ultimately, it’s about the earth, the lake and Duluth. “Just like flavours that transport you, that paint a little bit of a mental image. We have people that say they drink our gin and ‘I feel like I’m sitting along the banks of the Temperance River, by a waterfall or whatever’.”

But is it Terroir? “I think terroir is a really interesting idea… they study wine and obviously [with] wine there is a very clear idea of what it is and the history of expressing it… it’s a little bit different and more debatable in spirits because of the distillation process and what that does… for me it’s more about a place, as much as it is tasting the mineral from the earth that [a botanical] was grown in.” As for the water, Emily sees the notion of terroir more clearly. “And I also think that with water, you can add really subtle but notable nuances of flavour, that for us is a big part of our terroir because the lake is everything here… so it’s got to be very dominant in the character of our spirits as well.”

Emily’s Norwegian heritage also plays a strong role in her life. Northern Minnesota was popular with Scandinavian immigrants in the 19th century. Nearly 900,000 Minnesotans (16.5 per cent of the state’s population) trace their origins to Norway. Perhaps there’s further notion of place in the inspiration drawn from her mother’s storytelling, “If you think that terroir can be defined as [the] cultural practices of making something,” then perhaps you can see the Norwegian tradition in Vikre’s gins.

Terroir or not, Vikre’s gins aren’t attempts to simply duplicate what has been done before. In combining new traditions, Emily sees the work they’re doing as bringing people over to the category. “We have a lot of people who say I hate gin, but I love your gin,” she adds, “It’s fun to make gin that’s a little outside of the norm.”