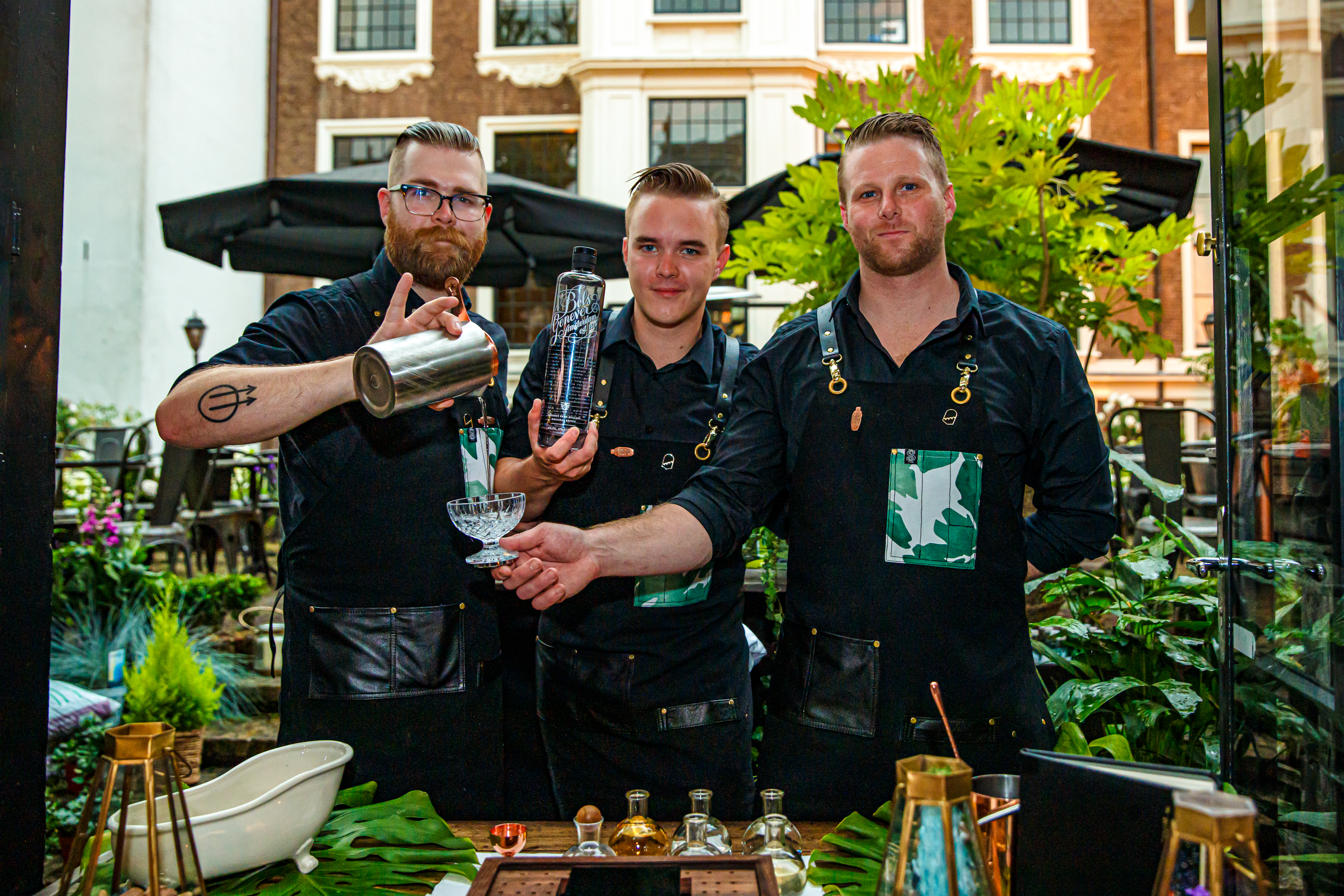 The Botanist Bar from Canada was crowned ‘Bols Master Bar Team 2019’, beating out 250 bar teams from over 40 countries during the ‘Bols Around The World’ competition. Their winning cocktail championed Bols Genever

The final was held in Bols Cocktail Street in Amsterdam, where the team from Botanist Bar competed against five other international bar teams for the title and a trip to a city of their choice. During the sold-out event, attendees had the chance to visit six bars, where each team served their cocktail creation in spectacular fashion.

Genever was a favourite as a base for the cocktails of all six final teams in the international competition. In the preliminary rounds nine out of ten participants also incorporated Bols Genever.

The winning cocktail by team Botanist Bar – comprised of Grant Sceney, Jeff Savage and Max Curzon-Price –was called ‘Into the Æther’, fitting into the Botanist’s laboratory style. Each of their cocktails embody one of nature’s elements: earth, fire, air or water.

Into the Æther raises the bar in terms of presentation and attention to Bols Genever. Inspired by the fifth element, spirit, the drink is clear, with an emphasis on bold and surprising flavours. Other ingredients include Botanist’s own-made vermouth, cold-pressed white tea, Maraschino liqueur, peated Scotch and salt water.

Ivar de Lange said, “The Botanist Bar has won the competition because they perfectly used the versatility and history of Bols Genever. By working as a team, they created a unique experience for the judges and the guests at Bols Cocktail Street. […] The Canadian team of the Botanist Bar in Vancouver showed that a true hospitality concept needs the best bar team.”

The Botanist Bar is located in Vancouver. Since it was founded in 2017, the bar has been recognised internationally. Bols Around The World is one of the leading bartending competitions worldwide. In each of the previous editions a single bartender was crowned the winner; however, this year the team behind the bar was honoured.

Two Dutch craft producers, Wagging Finger and Filosoof Jenever, have joined forces to create a genever that perfectly pairs with herring – a delicacy in the Netherlands.

The Netherlands has a long herring tradition. After the first herring cask is auctioned early in the summer, herring parties pop up all over the country. Traditionally a glass of genever is served with herring, putting a spotlight on genever – a spirit that still sometimes struggles with its image.

The new genever is a limited release and has matured in Fino sherry casks, while botanicals include beetroot, caraway and dill. It was created by Nienke Oostra (Filosoof Jenever) and Erik Molenaar (Wagging Finger).

A Michelin-starred restaurant in Rotterdam has decided to put the new genever on its menu. Oostra and Molenaar say, “To us, genever is the ultimate spirit for a distiller to use all their creativity. There are so many options and buttons to push.”

Luckily, according to Oostra and Molenaar, change seems to be on the horizon. Many new distilleries choose the craft approach, because, “there’s no spirit in which you can show your craftsmanship as in genever”.

An important part of the new genever is the in-house produced malt wine. The malt wine is made from 50 per cent barley and 50 per cent rye. The rye imparts a “subtle spicy character to the malt wine, as well as an oily mouthfeel”. The malt wine has matured in an Fino sherry cask for a few months. The malt wine is blended with neutral grain alcohol, which is distilled with botanicals like juniper, coriander, angelica and Sarawak pepper. Finally, three sprits are added, made from beetroot, caraway and dill. Herring combines well with the earthiness provided by the beetroot and freshness of caraway and dill.

The new herring genever, also dubbed ‘Exercise V2.0’, is the second genever released by Wagging Finger. ‘Exercise V3.0’ is expected in the autumn of 2019.

0 comments on “Genever inspires winners ‘Bols Around The World’”