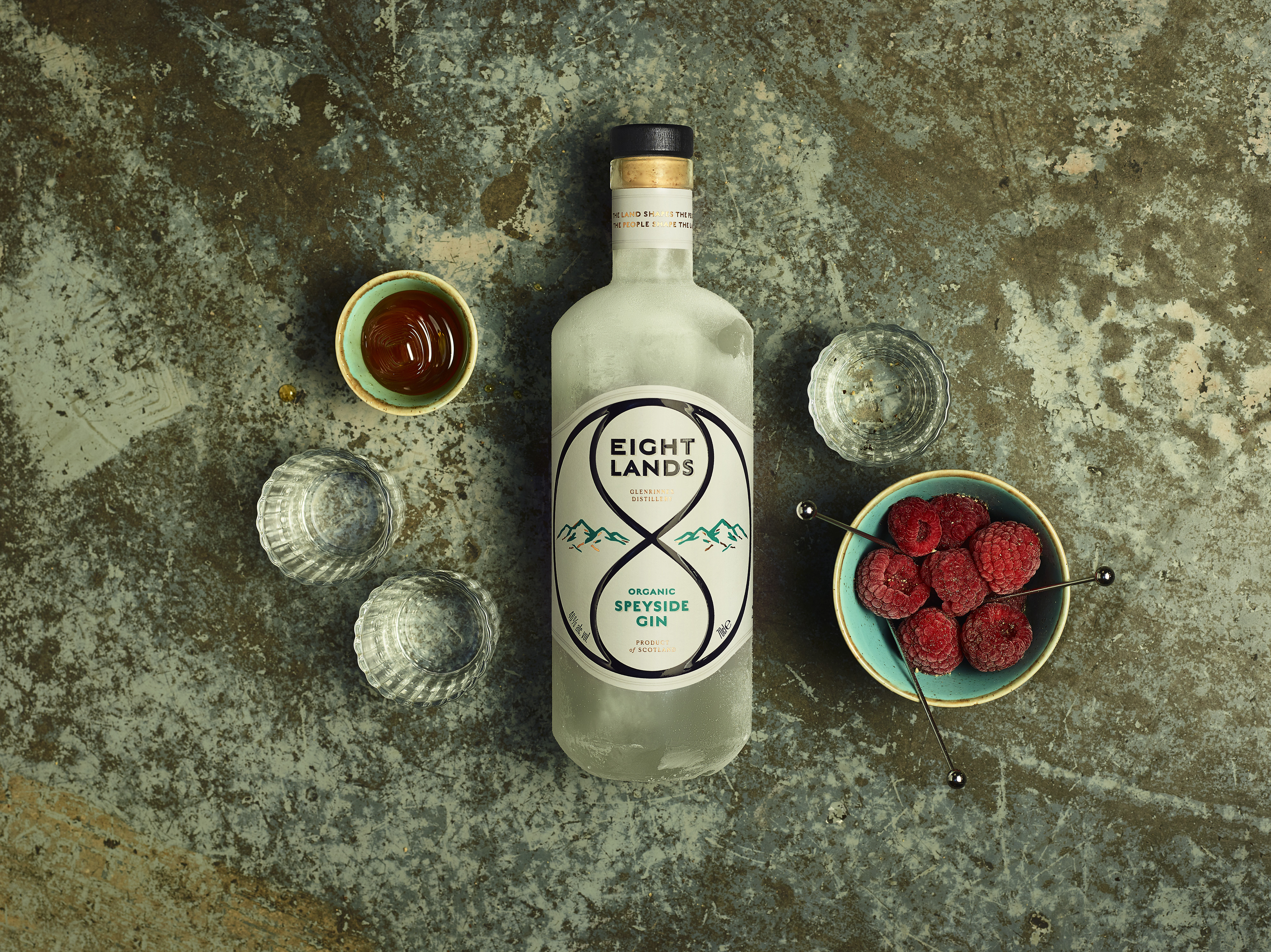 Speyside’s all about whisky right? There are a few people who might disagree with that notion and the Scottish region’s latest distillery hopes to put its organic gin and vodka firmly among the local whisky pigeons. Glenrinnes Distillery is the newest producer in the region and is looking to offer spirits lovers something different.

Founder, Alex Christou, says, “Growing up in the Speyside area, surrounded by some of the best loved whisky brands in the world, it never really interested us to try and compete with them and with their heritage. Instead, we wanted to complement the local distilling scene with something new.” Alex founded his distillery right at the foot of Ben Rinnes mountain and the gin and vodka is under the brand name Eight Lands – so called because from the top of Ben Rinnes you can see eight different counties. It’s not such a clear day when we visit, but it’s easy to see the enthusiasm that Alex has for creating organically produced spirits.

The distillery is set within the wider Glenrinnes estate, owned by Alex and his family and organically farmed since 2001. “The family had been looking at opportunites to diversify the estate beyond farming for some time, including possibilities afforded by the numerous freshwater springs located there. Gin and vodka seemed much more exciting than bottled water”, says Alex.

However, it’s all well and good having a stunningly built new distillery but you need people with know-how to make spirits befitting of such a place. Alex turned to Meeghan Murdoch and Katrina Stewart. Meeghan is the Glenrinnes operations manager and has more than 25 years experience in the drinks industry, taking in production, sales, brewing, wine-making and distilling. Katrina is a graduate of the Heriot-Watt MSc in brewing and distilling.

Meeghan says, “Growing up, my father was always so proud of our Scottish heritage.  When I heard that Alex and his family were looking to build a distillery here I contacted him immediately. This is my first new build project and having the luxury of building systems from scratch was incredible.”

The distillery is purpose built and carefully managed by Katrina and Meeghan. The water used in production is spring-water drawn from the Clashmarloch spring on the low slopes of Ben Rinnes. The stills include a 1,000 litre pot still called Rebecca – named after Alex’s wife – built by a local firm and intentionally flexible. On site is also a semi-automated bottling and labelling line – and yes, we’ve seen Alex, Meeghan and Katrina involved in labelling up the gins.

On the recipe Alex says, “We created a gin that first and foremost we really enjoy as a family. Gins such as Tanqueray 10, Botanist and No.3 were points of reference. The idea was to bring in one or two estate foraged botanicals that would help balance the end product and bright further provenance to Eight Lands.”  That recipe includes 11 different botanicals and cowberries and sorrel from the Glenrinnes estate. To taste, the Eight Lands Gin is in the London Dry style and is led by a fresh pine juniper note.
A tart berry note, presumably coming from the sorrel and the cowberries, rumbles behind the juniper before finishing with a slightly drying tea note. At 46% ABV, it packs a punch too, and stands up in a Martini.

There’s an experimental air about Eight Lands too. Alex talks about a concept he calls the ‘gin-ritual’, essentially a sociable food-pairing designed to accentuate notes from the gin. It involves dipping frozen raspberries into honey which has been seasoned with black pepper. Pop one of these raspberries before having a sip of the gin and the sweet, tart raspberries pair nicely with the gin.

It’s not uncommon for new producers or distillers to make gin while they await their whisky to come of age, however, Alex is almost bullish in stating that they haven’t got plans to turn away from gin and vodka just yet. In terms of location, Alex and his team believe that it will be advantageous to be a gin producer amongst whisky luminaries. “We have taken inspiration from the rich distilling heritage around us. We have benefitted from being able to tap into the local skills and expertise.”

And what about the future? Surely as one of the new kids on the block the plan is simply to see where the road takes them and consolidate what they have. It doesn’t seem like Alex is ready for his distillery and team to settle for too long – with ambitions to widen their distribution into new markets and the faintest hint that some of the gins they experimented with early in production appearing as seasonal releases. “We have ambitions to build the Eight Lands brand globally in the months ahead and I know that my family and our production team are incredibly excited about sharing our spirits with both the UK and other markets.”

On the future Alex says, “We have big ambitions for the brand. We are working with various partners to take Eight Lands global. We want to be recognised as a high-quality, delicious, organic Speyside spirits brand. We are keen to explore and experiment in the future, as we have the space and facilities to do so at the distillery.”

Eight Lands is a gin brand with a plan – Alex, Katrina and Meeghan may find themselves in the very centre of whisky country, but gin is very much the heart of their operation. Perhaps there’s more spirit in Speyside after all.

A true refresher, with tart lemon elevating the classic G&T. Build in a rocks glass and stir down. Strain into a glass over ice and garnish.

Here’s a few of our other favourite Speysiders.

Made by Speyside Distillery at the foot of the Cairngorms, the botanicals come from the distillery gardens and immediate locality. Two expressions are available – Byron Bird Cherry and Melancholy Thistle.

Produced at Benromach Distillery, the brand is named after the distinctive red door at the distillery. A classic London Dry style and botanicals including rowanberry and sea buckthorn.

0 comments on “A cat amongst the pigeons”