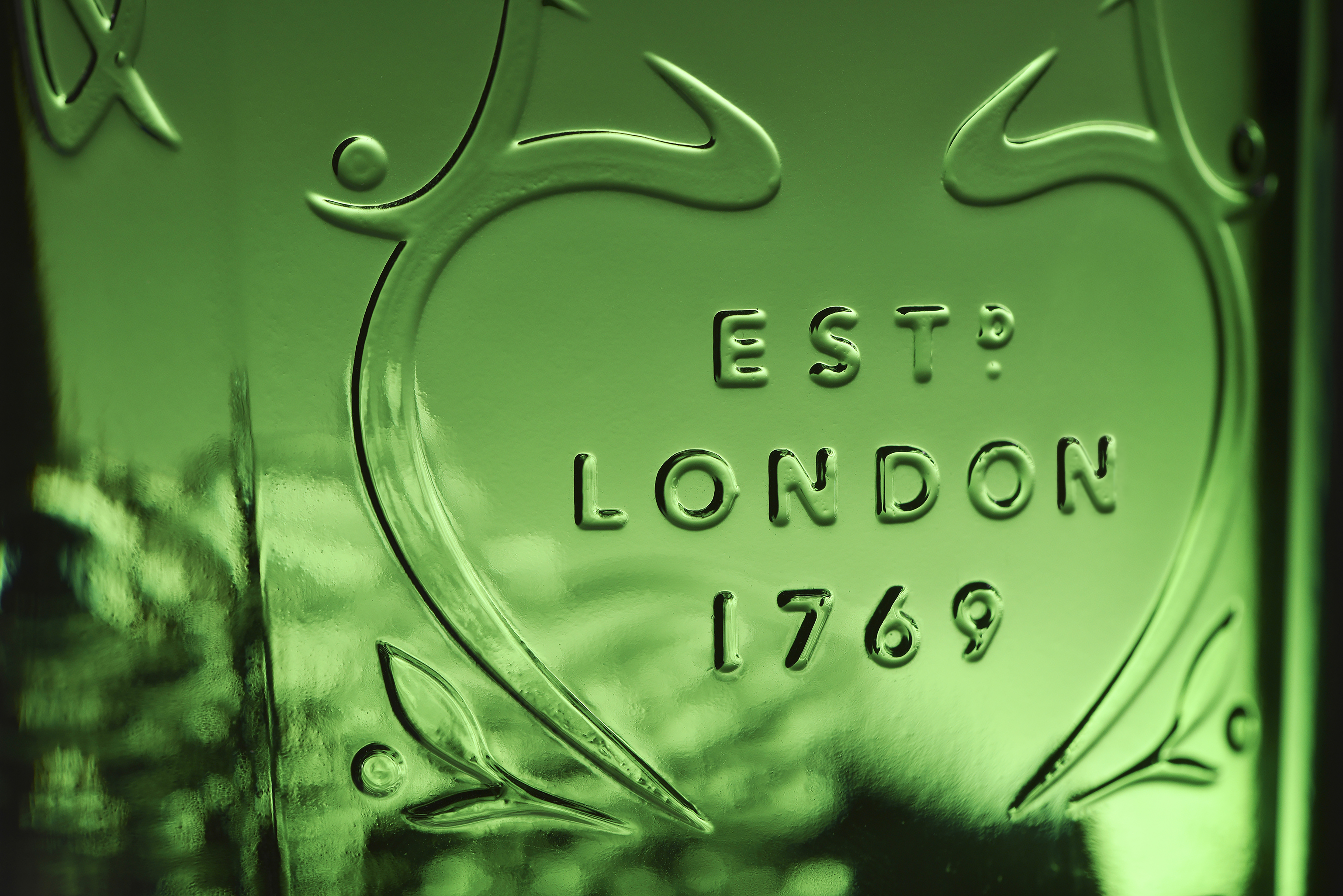 When asked, “What was the first gin that you tried?” many gin fans will probably answer, “Gordon’s” (that, or they can’t remember!). Available in more than 180 countries across the world, this institution of the gin world celebrates its 250th birthday in 2019.

How did it all start?

The House of Gordon was founded by Alexander Gordon of Scotland in 1769. Gordon began distilling gin in Goswell Street (now Goswell Road) in Clerkenwell, North London – an area known for its pure spring water and close proximity to London’s grain mills.

In the same year, Alexander married Susanna Osborne, the daughter of William Osborne, a linen draper, ship owner and friend of Alexander’s step-father, Capt. Charles Mackie. Susanna continued to be involved in the running of business after Alexander’s death in 1821 and the death of their eldest son, William, the following year. The couple’s second son, Charles, inherited the firm in 1822 and Susanna used some of her inherited wealth to inject fresh capital into the business.

Today, Gordon’s Gin is made at the Cameronbridge Distillery in Fife, Scotland, about an hour’s drive north of Edinburgh.

How is gordon’s made?
The Spirit

The first step in making Gordon’s Gin is the base spirit. This is a grain neutral spirit (essentially a high-proof vodka) that is typically made from wheat and categorised as A1 (the best quality there is). Although there are facilities for making neutral grain spirit at Cameronbridge, the spirit for the gins produced there is purchased from a specialist third party. With the base spirit ready, it’s time to move on to the botanicals.

Gordon’s uses four botanicals for their Special London Dry Gin: juniper, coriander, angelica, and liquorice. Consistency and quality is key. As such, the process of buying the botanicals is not as simple as just ordering them online from a spice merchant; instead, botanical suppliers provide a range of samples and then a vigorous testing process begins:

“The testing process is achieved through creation of mini distillations, which helps our dedicated nosing panel understand the flavour that the core botanicals will provide during each copper pot still distillation. We only accept one in 10 juniper batches from our suppliers as having the required quality and – importantly – the character for Gordon’s. In addition, we blend our different botanicals to ensure consistency, compensating for variations in crops over different seasons.”
– Terry Fraser, Gordon’s master distiller

The essential ingredient for any gin, juniper provides the spirit’s distinctive character: green, resinous, crisp, and piney. Gordon’s mature their juniper for 18 months in hessian sacks, which allow more air flow, and as a result the berries lose some
of their water content (this makes the berries very sticky when crushed in the hand). The maturation also concentrates the various flavour and aroma compounds, such as pinene, that distillers are looking to extract from the juniper during the distillation process.

This is a really important ingredient that is often overlooked. Gordon’s has a pleasant, crisp, citrus quality, but its botanical mix contains no citrus peels – all of that flavour comes from coriander. The character of coriander seed from different countries of origin varies considerably: it can be more spicy or more floral depending upon where it’s from. For Gordon’s Gin, coriander seed with a more citrusy character is required and it is currently sourced from Bulgaria.

A woody, slightly earthy botanical with a hint of sweetness, angelica root adds a dryness to the gin and helps bind flavours together.

Used in powdered form, liquorice root adds sweetness and earthiness to the gin’s flavour and complexity to its mouthfeel. Liquorice root is added, by hand, just
before distillation.

There are three main copper pot stills used at the Cameronbridge site, the most notable being Old Tom. Old Tom was built during the reign of George III (1738-1820), so is at least 200 years old and was the sole still to have survived an air raid during 1941 that destroyed the London distillery. Despite its age and need for occasional maintenance, it’s in remarkable condition and is described as being “the most versatile” of stills.

The stills at Cameronbridge are also used to make Tanqueray, and Old Tom is used for the final rectification of both Tanqueray Sterling Vodka and Smirnoff Black.

Whilst the Cameronbridge site is the largest producer of Gordon’s Gin for both domestic and export markets, there are also distilleries in Canada, South Africa and Nigeria. The gin produced at these distilleries are all made to the same standards as the UK site. To ensure this, there is a Quality Assurance Team based in Scotland who regularly receive and test the samples of Gordon’s produced around the world.

In its time, Gordon’s have made a variety of products beyond the realm of gin, including cherry brandy, kümmel, Jamaican rum, and a range of cordials based on things such as cloves and lovage.

In the early 20th century, flavoured gins such as lemon (which Gordon’s released in 1931) and orange (released in 1929) became popular. These were sweeter, but are described as being made using a combination of real fruit and juice, and were often bottled at a lower alcoholic strength to the dry gin.

Eighty years on and flavoured gins are once again in vogue, but whereas the focus in the 1930s was on the then unusual and occasionally scarce citrus flavours, the gin drinkers of today – particularly in Europe – are more interested in fruit flavours that are closer to home, such as rhubarb or berries, which can be now be found in modern
“Pink” gins.

Gordon’s Premium Pink was released in the UK in July 2017. The gin takes inspiration from a recipe from 1880 for a red berry liqueur. It is made using the London Dry Gin as a base and has flavours of strawberry, raspberry, and redcurrant. The gin has proved popular and in year two, has exceeded sales of over one million (nine litre) cases per annum.

Premium Pink Gin is not the only product to take inspiration from the past. In the 1920s, Gordon’s released a range of bottled cocktails, some of which were ready to serve immediately, whilst others required an extra ingredient such as orange juice. These were responding to a growing interest by the general public in drinking cocktails at a time when many lacked the knowledge to make them at home; bottled cocktails were a convenient solution. Varieties included: a range of Martinis (Dry, Standard, Fifty-Fifty, Perfect), a Gimlet, a Piccadilly Cocktail, Bronx Cocktail and a Manhattan.

The cocktails were packaged in miniature bottles shaped like cocktail shakers. The bottles were adorned with a heart-shaped label, reflecting Gordon’s advertising slogan of the time: “The Heart of a Good Cocktail”. A subtle heart-shape still exists on the front of every modern Gordon’s  bottle, inside of which it reads, “ESTD. London 1769”. The modern equivalent is the Gordon’s ready-to-drink canned drinks; in particular, the range of canned Gin & Tonics, which was introduced in the 1990s and now includes a Gordon’s Pink & Tonic.

In 2018, Gordon’s released two ultra-low Gin and Tonic flavoured drinks that are bottled at 0.5% ABV: one with a twist of lime and the other with a twist of grapefruit. These are reflective of a current, growing demand and interest in products that are not only convenient to consume, but low in alcohol.

The Future of Gordon’s

With regards to the future of Gordon’s Gin, global head of Gordon’s, Mark Jarman shared some thoughts as a final word:

“What excites me is how reflecting on our remarkable past inspires and ignites
our ambition for the future. From an innovation perspective, we will focus on supporting our newest launches – Premium Pink and Ultra-Low Gin and Tonic – which have made very exciting starts, but like all successful innovation need sustained effort
and commitment.

In terms of markets, the focus is always on Great Britain and Continental Europe as our mature gin markets, however, we see huge potential across all continents where Gordon’s can play an essential role of democratising gin as we have been doing for two and a half centuries.

So whilst we are 250 years old, the optimism and energy we have for a bright future for Gordon’s and the category as a whole, definitely makes us feel 250 years young!”

Travellers’ Edition (47.3% ABV)
A travel retail exclusive, this has the same botanicals as the Special London Dry, but bottled at a higher alcoholic strength; classic, but with an added intensity.