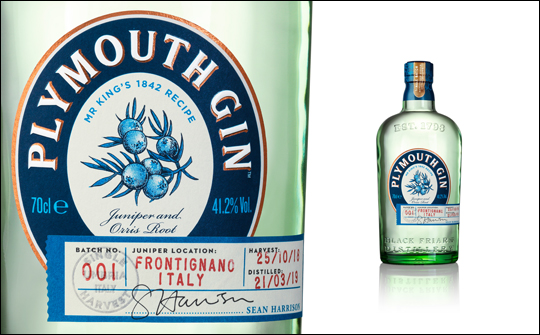 The launch of Plymouth Gin’s Mr King’s 1842 Recipe marks the first special edition bottle in a series that celebrates the spirit of exploration. The craft gin has been reimagined using a recipe from 1842 and only 2,000 cases have been produced.

Mr King’s 1842 Recipe combines orris root and juniper, the latter of which was harvested in a single day and from a single hillside in the mountains of Frontignano, Italy.

Master distiller, Sean Harrison spent time exploring the hills in Umbria to gather the highest quality juniper, alongside expert local pickers. The area has been a part of Plymouth’s history for decades and continues to be an important part of the gin making process in the present.

With the advancements in today’s gin production, the team at Plymouth Gin have been able to reproduce the recipe that was discovered in the vaults at the Black Friars Distillery, but with even more precision.

Sean Harrison commented: “Mr King’s 1842 Recipe is a truly one-off craft gin that we will never be able to recreate again. Even if we were to visit the same Italian hillside next year, the climate and harvest conditions would affect the juniper resulting in a different taste profile. At a time when other brands are using many different botanicals throughout the distillation process, Mr King’s 1842 Recipe focuses on just two and the result is something very special. It’s an honour to bring Mr King’s gin into the 21st century.”

A limited run of Mr King’s 1842 Recipe is available to purchase online at www.plymouthgin.com, as well as in store at The Whisky Exchange, Covent Garden and Fitxrovia, and online. RRP £45.50.