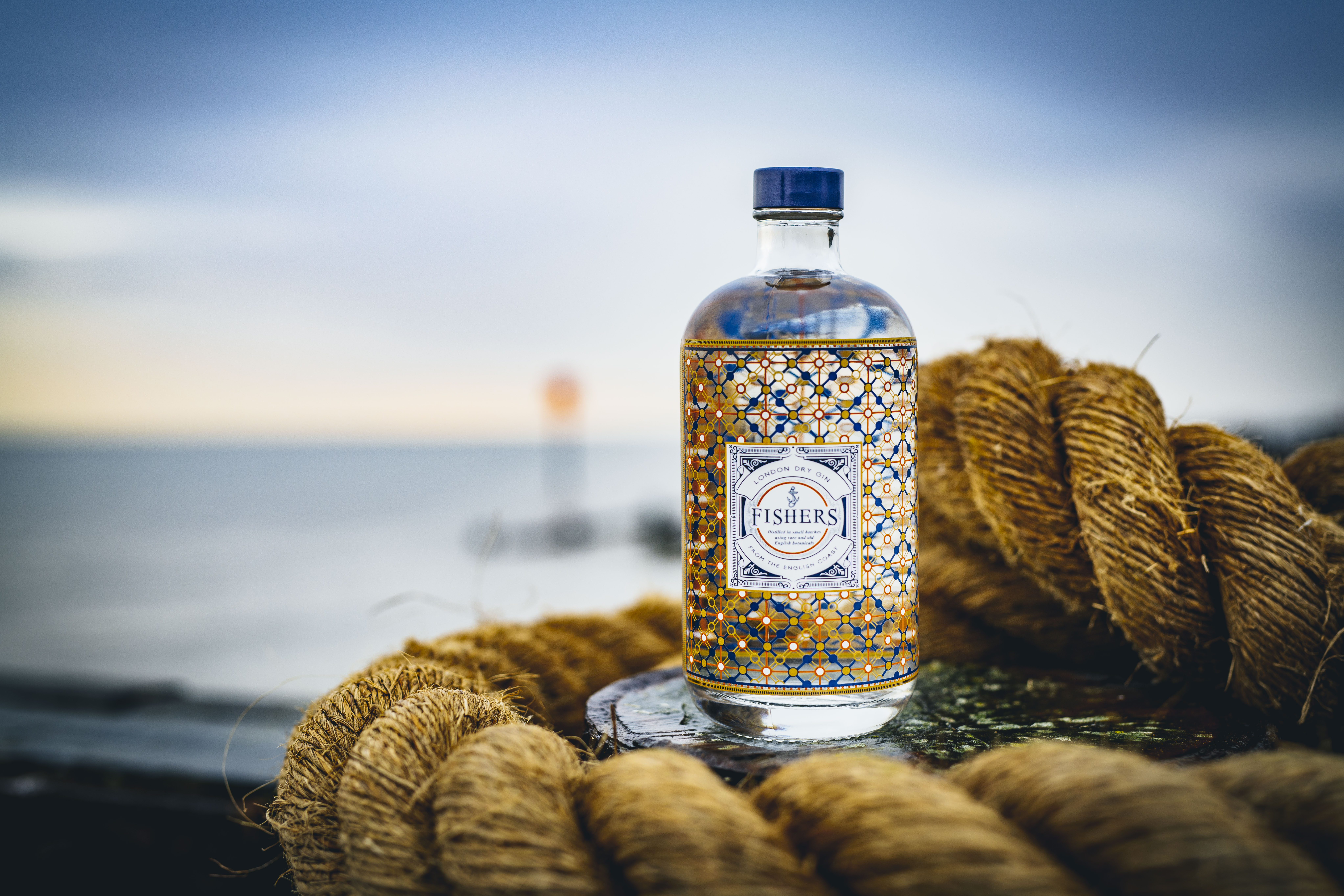 The relationship between gin and the sea is nothing new; historically, Navy-strength gin was consumed by sailors on long voyages – it fared better than beer below deck – while British Royal Navy ships were famously given gin as a cure-all remedy against malady and disease. Today, the associations between gin and the sea still abound, with the UK’s shores and coastlines across the UK influencing the spirit, flavour and make-up of many gins today. Here, we take a look at some of the distilleries you should be getting acquainted with if you like your G&T with a side of sea…

The British seas and shorelines have long inspired art, literature, music – and they can now count gin under their remit, too. One such gin to list the sea as one of its inspirations is Suffolk’s Fishers Gin. “The very nature of gin means that most botanicals usually come from abroad. But we wanted to find some native botanicals for Fishers, to be true to its origin from the English coast,” explains Luís Coutinho, marketing manager of Fishers Gin. “Andrew Heald, Fishers founder, sought the help of an old family friend, James Firth, who is passionate about botany and he proposed the combination of botanicals that we use today.” Handcrafted in postcard-pretty fishing town and coastal hotspot Aldeburgh, between the sea and the salt marshes, Fishers infuses local herbs and coastal botanicals, such as spignel, rock samphire and bog myrtle, into their gin, in turn capturing some of the more wild and forgotten flavours of the English coastline.

The coastal-inspired botanicals used in Fishers influences the gin’s flavour, too. “Fishers is quite different in its style and flavour,” adds Luís. “In Fishers you’ll find saline, herbal, savoury tastes that you typically associate with coastal food. It’s quite unique to say the least – we want people to be transported to the sea when they drink it.”

On top of influencing flavour, the coast also plays a key part in the bottle design of Fishers; the bottle design is based on a fishing net, which makes for a striking geometric design. The blue, orange and whites which adorn the bottle are commonly found on fishing nets in Aldeburgh. “The gold is added to give a little sparkle – like finding a pearl or a jewel on the beach,” explains Luís. The Suffolk coast also looks set to inspire Fisher’s future plans and development, too. “We will be opening a new distillery in Aldeburgh, in a stunning location flanked by the River Alde and the North Sea. The distillery will be a first for Aldeburgh, and it’ll be the closest one to the sea in the UK. We will be hosting a number of foraging experiences around the beach and the salt marshes, so people can learn about the wild herbs and botanicals that make up Fishers’ unique profile. The distillery will be a true reflection of Fishers is all about – an expression of the English coast.”

Fruits of the sea

As well as being heavily inspired by the sea, there are a number of gins from the UK which go as far as using botanicals from the sea and its shores – think seaweed, sea purslane, sugar kelp and more – all of which help to add an intriguing salinity, which can offset fruity, floral and spicy notes, in gin. For Scotland’s Isle of Harris Distillery, which opened its doors in September 2015, sugar kelp (a brown seaweed which often resembles lasagne sheets) is a key component in its gin, alongside juniper, coriander seed, bitter orange peel, liquorice root, orris root, angelica root, cubebs and cassia bark. “Sugar kelp plays the starring role in our gin,” explains Isle of Harris’ Shona Maclennan. “We work with local diver and seaweed expert, Lewis Mackenzie to gather this seaweed from local seas and sea lochs sustainably. During the spring and summer months, Lewis hand-picks the golden-green leaves, before they’re dried locally. During the winter, the kelp forests are left to regenerate, ensuring the local habitat for seaweed is unharmed.”

Once dried, the sugar kelp is added to the other botanicals, which are macerated during the gin making process – but the sugar kelp is added separately and removed earlier than the other botanicals so as not to overpower the spirit. The result is a smooth, complex and refreshing gin, with fruity and citrus notes, which also carries a gentle reminder of the Isle of Harris’ seas and shores thanks to the addition of sugar kelp. Interestingly, the team at Isle of Harris also produce Sugar Kelp Aromatic Water to intensify and accentuate the influence of this botanical in their gin. “Adding a drop or two of this distilled sugar kelp really changes the profile of the gin and intensifies the maritime notes,” explains Shona. “Plus, it works great with seafood, especially scallops.” How’s that for a taste of the ocean?

Another distillery taking inspiration from the sea – and land – is Whitby Gin. While still in its infancy – the distillery won Best British London Dry in at the World Gin Awards 2019, only 10 months after launching – they’re already turning heads and awakening palates. “With both the North York Moors and the Yorkshire coast on our doorstep, we realise how lucky we are to live in a place of unrivalled natural beauty,” explains Jessica Slater, co-founder of Whitby Gin. “The stark contrast between land and sea has been our greatest source of inspiration, from the botanicals we use in our packaging, which includes Whitby coordinates on the tamper seal. In order to capture the diversity of native botanicals, we explore the rugged coastline and dip below the ocean surface to find our enchanting ingredients.”

Alongside earthy, hand-foraged heather and raw heather honey from the Yorkshire Moors, sugar kelp, foraged sustainably during low tide at Robin Hoods Bay, is used “like salt” to enhance the existing botanicals and to create a uniquely fresh flavour that encapsulates a taste of the sea. Looking to take that maritime profile a step further? Try pairing Whitby Gin with seafood, recommends Jessica. “We’re firm believers that our gin is best partnered with seafood. It’s refreshing to sip with fish and chips, but Whitby Gin-cured salmon or gin batter calamari is our personal favourite.”

Distilled close to the sea, Brighton Gin features locally-grown coriander seed and milk thistle, which are indigenous to the South Downs.

This waterside distillery is home to South Devon’s multi award-winning gin, made with water from Dartmoor National Park.

Dà Mhìle’s Seaweed Gin is infused with seaweed harvested from the Welsh coast, giving it its distinctive green hue.

This distillery’s Seaside Gin is inspired by the Scottish East coast. Botanicals used include bladderwrack and scurvygrass, giving it an attractive minerality.