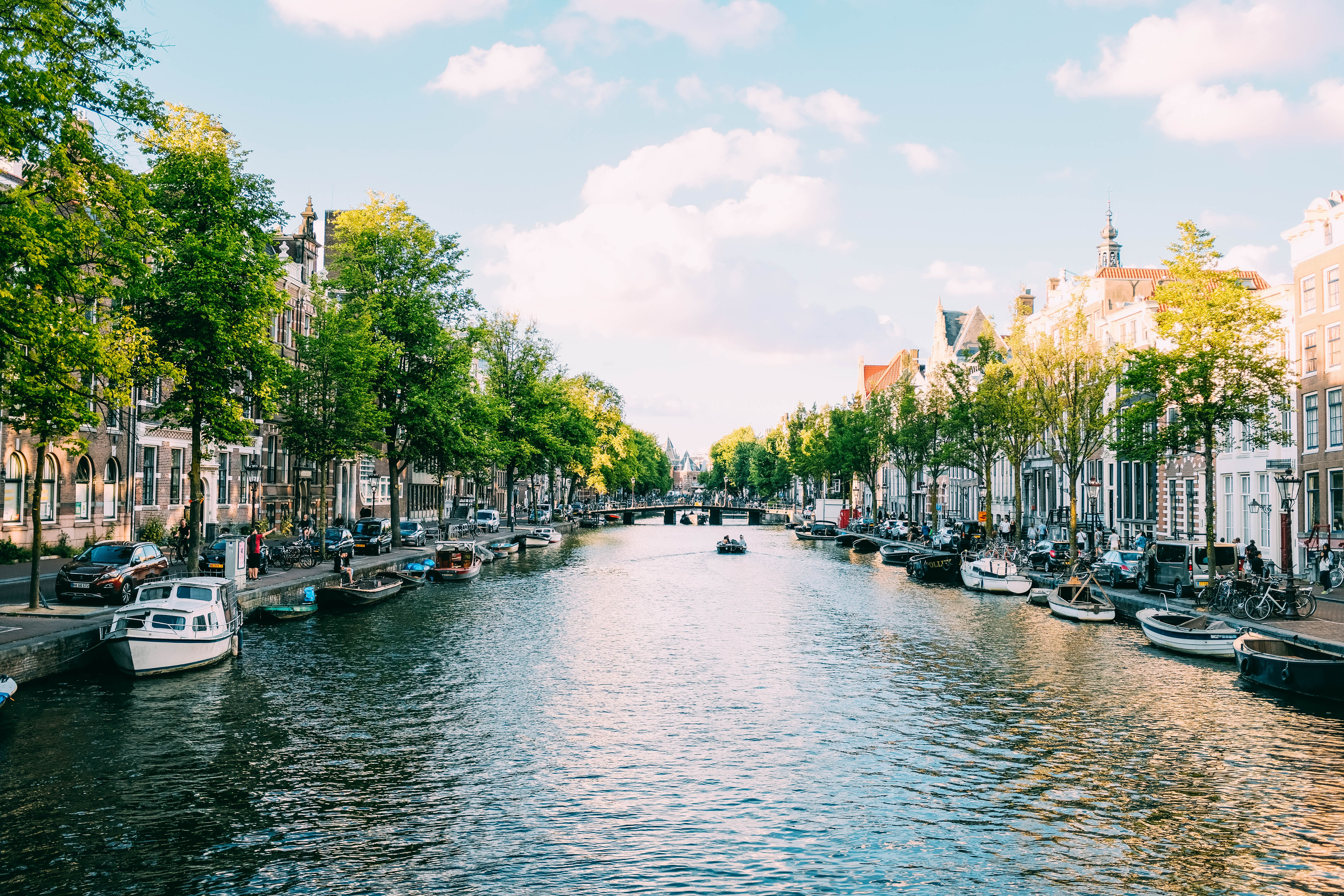 It’s a well-used trope for gin writers in the UK to doff their caps to the Dutch and acknowledge the role genever has played in gin’s evolution. We like to do it to appear worldly and in-the-know. But, how many gin-lovers, i.e., the real people drinking the stuff, have packed their bags, hopped on a flight (or train as well, these days) and explored the Netherlands and its gin/genever scene?

With its major airport serving European visitors and international guests from across the globe, it’s about time that more of us step on to Dutch soil and get to know the brands that are continuing the tradition (or innovating) with Dutch genever and taking it further with gin expressions too.

Let’s set just one ground rule for when we talk about gin from the Netherlands. A simple Google search of ‘Dutch gin’ offers results that almost suggest genever and gin are one and the same. It shouldn’t surprise you really, but they’re not. Due to the malt wine content of genever, some will resemble whiskies, while others will be closer to gins. When you get into the territory of aged genevers, they often seem a far reach from gin. Keeping in mind that a number of gins (as we know them) are also being produced in the Netherlands and it’s just far easier to refer to genever as genever and gin as gin.

So, here’s our starting point for getting to know Dutch gin and genever.

Amsterdam is a safe start in the sense that most people will fly into Schiphol airport and shuttle buses, train, trams and all manner of other metal containers used to herd human beings, offer easy access to the capital city. The city itself is a curious one, nothing is quite what it seems and you can easily lose a day amongst the many walkways and stroopwafel.

It was put to me early-on that Amsterdam does not yet have the cocktail scene that London has to offer. However, with notable openings such as Super Lyan (from the people behind White Lyan and Dandelyan) on the way, and standouts such as Rosalia’s, there’s a growing sense that things might be about to change. Early predictions would suggest this means a resurgence in the Dutch gin scene, with cocktails driving interest in gin and genever brands from home and abroad.

I had initially figured that on this trip ‘going Dutch’ would entail cycling from distillery to distillery. A brief pedal around (sober) and I wisely decided that this was probably a sure-fire way of ending my trip prematurely. Normal cycling rules don’t apply here. Helmets are shunned in favour of fashionable headwear and yet, the pace doesn’t drop, even in the city-centre. Factor in tram-lines and the fact that if my visits were successful I’d likely be less sober than I started and I plumped for walking and taking the (affordable) tram instead. Insurance companies can thank me later.

Kever launched in 2015 in Amsterdam, after four friends gathered round their student digs one Christmas and tried a bottle of genever. Lamenting what had happened to this piece of Dutch history, the young team created their own take on the spirit and Kever Genever was born. Working with their master distiller Arthur Kruijt, all of the components of their genever is made by them; maltwine, grain alcohol and tincture distillates, a process which is rare in the Netherlands these days.

But what profound, significant and historical meaning is there in the name, I hear you cry. Well, it rhymes. Yep.

Moving on then, and perhaps most importantly, how does it taste? Currently there are two expressions – Crisp and Hoppy Genever, and Old Genever. A nose of the Old Genever is to enjoy refreshing IPA beer notes with a hint more maltiness, along with sugar coated cinnamon and apple pie. Think tropical fruits and fresh banana bread. To taste, it’s smooth with a coating mouthfeel. It opens with delicate notes of mango and banana before a creamy note comes through. Surprisingly it’s very easy drinking, little-to-no alcohol burn and would be a nice sipping option over ice.

For all the bluster about refreshing the genever category – what does this actually mean? Leonard and Ruben, two of the four guys behind the brand, were candid when telling me that even in the Netherlands, fewer people are drinking genever. Perhaps with the nascent bar scene, it makes sense that they are investing a lot of time in pairing their genevers with beers from different craft producers from across the Netherlands, forming relationships with bars, and their website features a series of cocktail suggestions. The Crisp and Hoppy Genever is even designed to be paired with beer.

The pace of change with these guys is quick and we can further news in the coming months, or so I was led to believe. It’s hard to miss the distinctive metal packaging that resembles an old fuel can and the best news yet is that it’s readily available in the UK, in travel retail and on their website: http://www.kevergenever.com.

From a brand that is less than five years old to one of the world’s oldest distilled spirits brands, both bring something to the story of Dutch gin and genever. Lucas Bols has a history dating back to 1575 and today is perhaps best-known outside of the Netherlands for its extensive portfolio of liqueurs. However, let’s first talk about Damrak Gin, which is owned and produced by Lucas Bols.

Damrak was the mooring place for merchant ships arriving in Amsterdam with exotic herbs, fruits and spices. With this name, it is perhaps not a surprise then that the botanicals used in Damrak gin are similarly inspired. The main distillate consists of Curaçao orange peel, Valencia orange peel and lemon peel, which brings a sweet citrus forward note. Add a little angelica root, cinnamon, lavender and star anise, along with juniper and you have the bulk of the 17 botanicals. The rest are the master distiller’s secret. Having been around a little while, it’s perhaps a gin ahead of its time, with the orange forward flavour surely appealing the craze for orange flavoured gins in summer 2018 and early 2019. Available through online retailers in the UK, it’s worth grabbing a bottle if you’re into the orange-gin world.

The range of Lucas Bols genevers is also likely to be familiar to those in the UK. Bols started producing genever in 1820 with a recipe that is used and loved today. The original deserves to be a standard on any gin bar and is readily available across the there’s a cocktail of your choice waiting for you at the end. Sat in the Museum Quarter of Amsterdam, a stone’s throw away from the Rijksmuseum and Van Gogh museum, the House of Bols is a must-see stop for any gin-loving tourist.

Hipsters rejoice. You’ve completed the Bols Experience and want to discover the Lucas Bols Distilleerderij, or ‘distillery’, to you and me. You also crave a small space, with exposed brickwork and beams, within with you can engage in typical Dutch drinking traditions, enjoy a variety of interesting beers and learn a thing or two. Take a tram from the House of Bols to Dam Square, take a peer around and you might spot a narrow-looking alley with Wynand Fockink Proeflokaal (or tasting tavern) around halfway down.

Wynand Fockink started a liqueur distillery in around 1679. A tasting tavern was added shortly after and it still stands proudly there today. World War II proved tough for many genever producers in the Netherlands, Wynand Fockink included and in 1954, the company was acquired by Lucas Bols. Wynand Fockink produces over 70 Dutch liqueurs and genevers which can all be tasted on site. 2-9pm, you can watch patrons bow to the drink and slurp the first sip.

Producing its own range of genevers, including a jonge, oude, korenwijn and even some interesting numbers such as a rye genever and an IPA genever, Wynand Fockink offers the comprehensive Dutch gin experience. The on-site distillery was renovated in 2013 with two copper stills. Down this little alleyway off one of Amsterdam’s major squares, the Wynand Fockink gin, genevers and liqueurs are made, along with the heart of Amsterdam Bols genever and distillates for Bols liqueurs and Damrak Gin. For those seeking a tropical note to their genever, have a slurp of the IPA Genever, while the Wynand Fockink Amsterdam Dry Gin offers a more floral palate than the Damrak Gin from Bols.

Stumble out having drunk responsibly and it’s worth picking up another stroopwafel, before continuing your Dutch gin adventure.

As life in the capital rumbles on, Dordrecht offers a charming relief to the bustle. An easy train ride that involves a change in Rotterdam, it is the home of Rutte Distillery.

I meet Myriam Hendrickx, master distiller at Rutte since 2003, outside the distillery. You’d be hard pushed to guess where the distillery was, but look through the window and the genever bottles prove a giveaway.

Rutte’s history has been passed from generation to generation and Hendrickx now continues that legacy. She tells me that rooting through attics she stumbles across old recipes that inspire new expressions.

In the bowels of the distillery, Hendrickx stores and tests numerous infusions and distillates. It’s hard to not be taken in by her enthusiasm for experimentation and it’s easy to see why she has a reputation for approaching distilling as a chef would food.

Rutte was making gins, genevers and liqueurs since 1872. Today, guests can visit the distillery for a tour or enjoy samples in the tasting room. The range of spirits is extensive, with varying availability depending on the market. A tasting of the Celery Gin, which has a savoury note amongst classic flavours, proves an early favourite. The Sloe Gin is mouth-wateringly good. On the genever front, both the Old Tom Genever and Single Oat are real treats.

WHERE TO DRINK:
Rosalia’s Menagerie

Amsterdam was my base during the trip and you’ll undoubtedly need somewhere to drink in the evenings. If the many establishments offering cheap beers don’t float your boat, then why not try Rosalia’s? Recommended by Kever, it’s not a late-night dive, but perfect for enjoying cocktails and genever.

Specialising in cocktails and genever, it’s a cosy environment inspired by Dutch heritage. It was opened in 2017 and straddles one of Amsterdam’s oldest canals. Cocktails focus on korenwijn and genever for their base. I recommend the Amsterdam Sour.

WHERE TO EAT:
Mossel & Gin

Eating is important and those supplementing their gin in the Netherlands could do worse than stopping off at Mossel & Gin. Set in the Westergasfabriek, it offers wholesome mains and a healthy gin menu with global brands.

It was impossible to visit all of the distilleries I wanted to see. Nolet, producers of excellent genever, the famous Ketel One vodka in Schiedam and Zuidam Distillers in Baarle-Nassau, were recommended, while Sir Edmond gin was recently awarded in our blind tastings. It’s interesting that there’s murmurings of a renaissance for genever in the UK and US, but given enthusiasm for gin tourism, it surprises me that so few people look to gin’s forebears. With the quality of gin produced in the Netherlands alongside the excellent genever, it should be one of the first stops on people’s itinerary and there’s excitement brewing about the bar scene. We’ll be seeing more from the Netherlands soon, but it’s worth a trip before then.