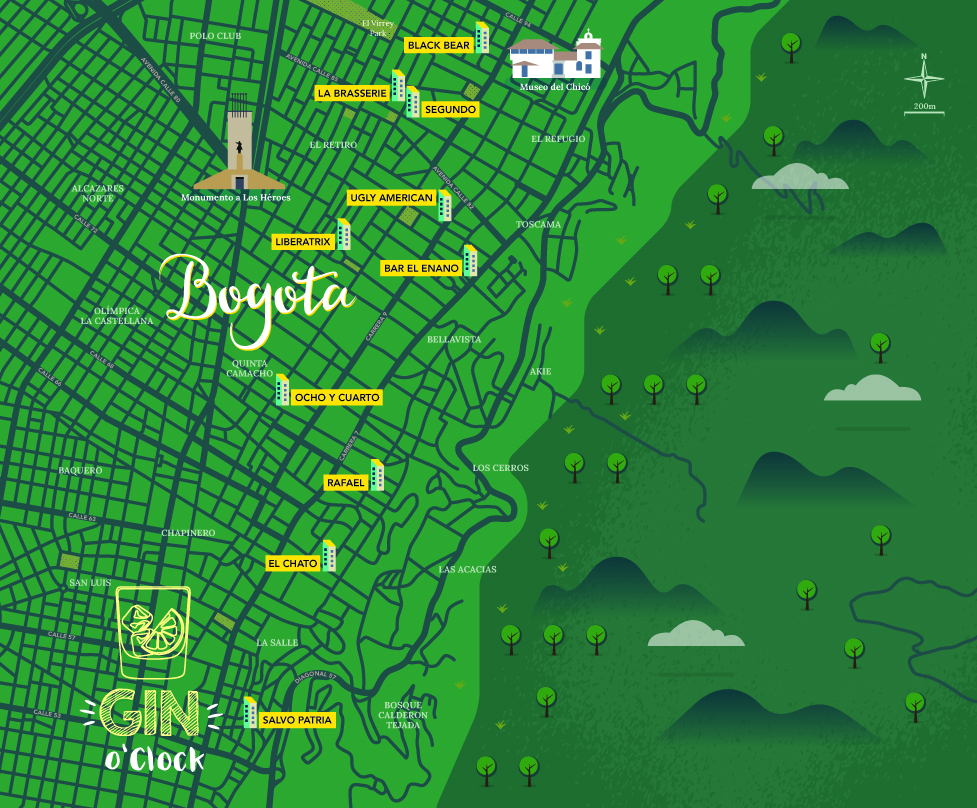 Where South American flavours and global giants come together

Bogotá isn’t exactly a leader, even for South America, in the cocktail renaissance. But it is a city on the rise, particularly in the dining realm at the mind-blowing World’s 50 Best-winning restaurant, Leo, or other excellent restaurants like El Chato (listed below). While the drink scene may not be as globally savvy as the fast-rising dining scene is in Bogotá, there are a few bartenders who actually play with local ingredients and showcase the wealth of Colombian produce in a better way. In a country where liquor laws and government taxation make local production often impossible, local spirits are few, but these bars know how to best play with spirits — and gin.

One of the city’s best bars hides in Segundo’s chic restaurant, a den of bricks, woods and retro chandeliers. Pull up to the high-ceiling, rectangle bar where San Francisco’s Erin Rose, Takami Group’s bar director, highlights Colombian ingredients, which are surprisingly rare across the city. East-meets-west tapas delight (don’t miss squid ink tempura asparagus) alongside a G&T with prosecco, lavender and hand-cut ice, or a Bee’s Knees perked up with blackberry. Colombian cacao or bark might show up in a cocktail, while the James Bond Vesper Martini contains a splash of local feijoa (pineapple guava).

One of Lima’s most celebrated chefs, Rafael Osterling, opened a Bogota outpost in 2007. Here, Peruvian expats and fans of the country’s complex Chifa and Nikkei cuisines (Chinese and Japanese-influenced Peruvian food) fill up on ceviches, tiradito and lomo saltado. The skylit bar (which gives way to an intimate dining room) houses an extensive pisco selection and beyond, heavy on classics like a Pisco Sour and Peruvian-influenced cocktails. Look for rarities like Peru’s London to Lima Gin, beautifully shaken with sherry, yuzu ahumado and grapefruit.

Ugly American is anything but ugly. Head down a staircase to this subterranean basement restaurant with long, sweeping bar and welcoming staff. The menu is all things American from upscale “fat kid cheeseburgers” to artichoke spinach dip or chicken and waffles. The bar feels plucked out of New York serving boozy classics like clarified Negronis, Jameson picklebacks and banana Old Fashioneds. While drinks lean basic, touches like house tonic in the G&T, or local ingredients like agras play with lime, gin and egg white in the impeccable Agras Gin Fizz.

Sustainable, local food shines from this little house in a residential neighbourhood. Salvo Patria is casual, relaxed yet festive in a multi-room space (with front patio) that exudes ease and welcome, as it also showcases modern Colombian cuisine at its best from founder, Juan Manuel Ortiz and chef, Alejandro Gutiérrez. Affordable and delicious, look for dishes like local molluscs harvested by women in a Colombian mangrove forest, served with avocado and white carrot granita. Cocktails are simple but refreshing, heavy on local fruits, as well as gin classics like a martini, Negroni and seasonal gin and tonics. Bonus for coffee geeks – fantastic Colombian-grown beans are served via siphon, chemex or AeroPress.

Every city has its pioneers who helped usher in the cocktail renaissance and Black Bear is Bogotá’s pioneer. This bistro-style restaurant boasts covered garden terrace overlooking a lush green lawn, while the horseshoe bar is an ideal perch to imbibe some of Bogotá’s best cocktails, overseen by Takami Group bar director, Erin Rose.
The restaurant’s raw bar menu makes a light bite and cocktails an all-day proposition. G&Ts might include a splash of prosecco, while gin gimlets are mixed with cucumber and rose water. Life Aquatic is a refreshing gin original, mixing Beefeater gin, Colombian feijoa fruit, rosemary, grapefruit and lemon.

Talented chef Alvaro Clavijo has been a Colombian chef to watch with El Chato making international waves on The World’s 50 Best Restaurants list. The cosy two-story space hides an attic dining room gazing over the rooftops of Bogotá, enhanced by chef Clavijo’s inspired dishes like plump chicken hearts with native Colombian potatoes, grated egg yolk and sour cream. Cocktails go local with infusions of Colombian herbs and spices, or by playing with native fruits. House ‘mules’ utilise herbs and tropical fruits, while they might serve a spirit shot infused with gingerroot. Gin gets its due in drinks like Pati-Gin where gin, Campari and soda are enlivened with watermelon kombucha.

While La Brasserie — a Bogota staple since 2007 — may be a standard French brasserie serving steak tartare and escargot all day in its sunny dining room and outside terrace, La Brasserie’s basic bar shines mainly because they offer multiple types of Gin & Tonics made from an array of gins matched with different tonics, garnished with fruits and herbs.