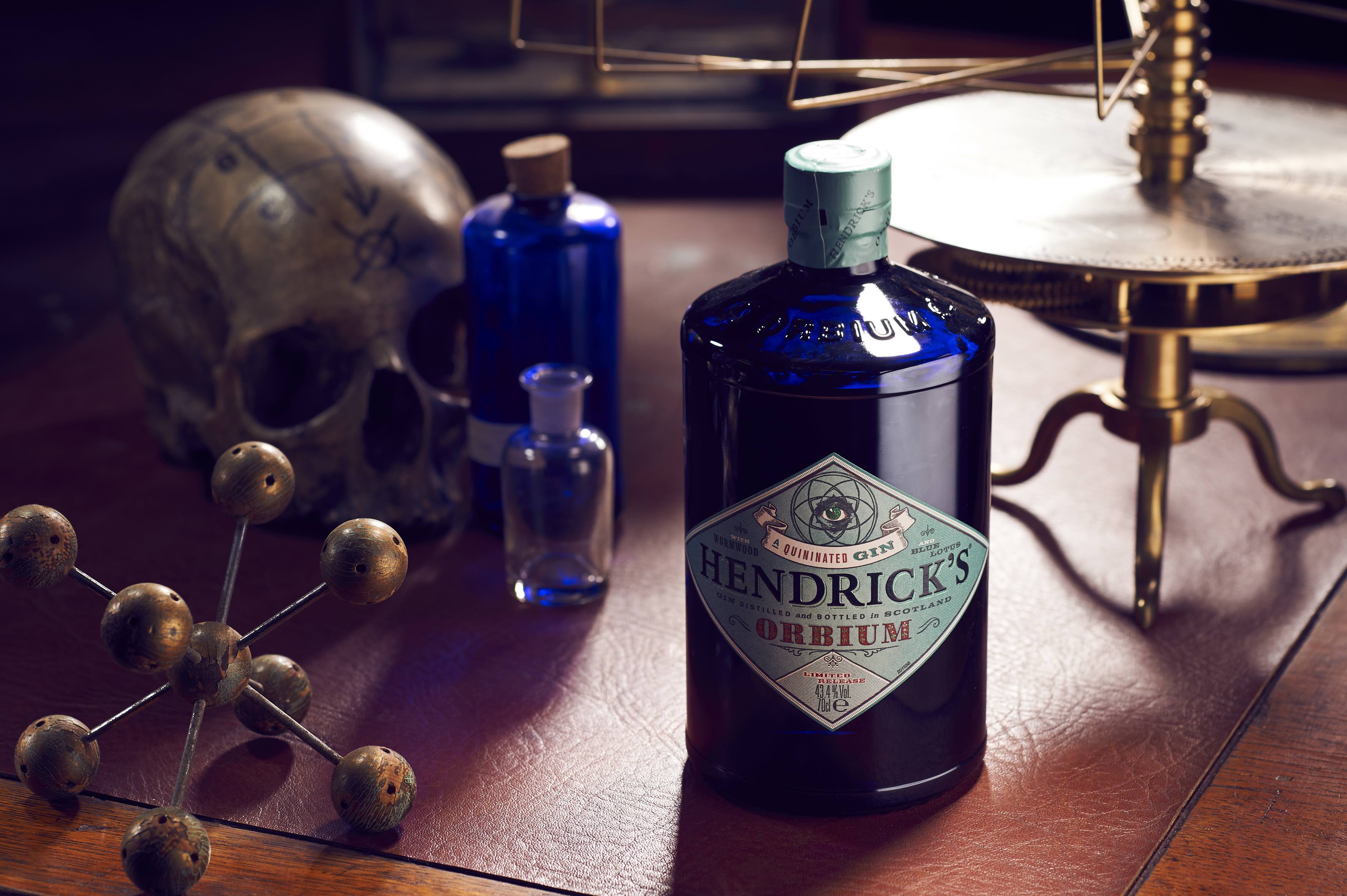 Meet the maker behind a gin with a twist

There is not a gin enthusiast the world over that doesn’t know about Hendrick’s gin. A ground-breaking gin, made by a unique distilling method, a flavour profile of cucumber and rose, distinctive Victoriana branding and a signature serve G&T with a slice of fresh cucumber. But it is the mastermind behind it that is less well known. Lesley Gracie is master distiller of Hendrick’s; a warm, endearing, nature-loving, gardening fanatical Yorkshire woman who is modest and brilliant in equal measures. Awarded ‘Distiller of the Year’ by Gin Magazine last year, we now find her at the centre of the ground-breaking new distilling home: The Hendrick’s Gin Palace.

Lesley is as delightful and curious as the gin she invented. Listening to her speak about flavour is wonderous. She bubbles with joy regaling tales of botanical hunting and distillation experiments. She delights in the wonders of nature: an avid gardener with a penchant for orchids, professing to have filled her home with more than 80 orchids and admitting to preferring animals to people, she proudly tells me about her pets: a dog, two tortoises, a hamster, two rabbits, fish and a pond soon to be full of frogs.

She is a woman who is at one with the natural world, moving lovingly and curiously within it. One gets a glimpse of her genius when asking her about flavour. When Lesley tastes flavours, she sees shapes. Hendrick’s, to Lesley, is spherical – round and perfectly balanced. She describes this as making her ‘weird’, but I find nothing weird about her. Unusual, yes, but her mind and talent are at the heart of her brilliance.

On asking her whether her love of flavour extends to food and whether she is a good cook, she explains that she has minimal interest in food and thinks that there is far more room for play with flavours in drink than in food. So, I ask her what her favourite cocktail is, and she tells me she would never make herself a cocktail, that she would never have the right ‘paraphernalia’, divulging her down to earth character, devoid of pretension. She drinks her Hendrick’s never in a G&T, but rather with soda water and elderflower cordial, with a slice of cucumber.

Lesley’s background is in chemistry, and in particular flavour work, which she has been doing for William Grant and Sons since 1988. Previous to this she had been working in research and development in the pharmaceutical industry, figuratively learning how to ‘sugar the pill’ – making medicines taste nice. In 1999, gin was not in vogue and the gin industry was dominated by a handful of usual suspects. The late Charlie Gordon, then chairman of the family run W. Grant and Sons, commissioned Lesley to create something extraordinary, something that would go on to revolutionise the gin industry, spark the gin renaissance that we are still in the grip of today and which would continue to be one of the top selling gins worldwide. Her brief, a gin full of character, reminiscent of eating cucumber sandwiches in an English country rose garden. So, Grant’s took a woman whose expertise was to make even something unpleasant taste good and gave her free rein with the finest ingredients and tools, so it is little wonder she invented something extraordinary. And Hendrick’s is extraordinary. Lesley developed a unique method of distilling two distinct distillates using eleven botanicals and two different types of still, then blending them together and infusing them further with two essences – rose and cucumber.

It is remarkable indeed that the world-famous Hendrick’s hailed from a tiny hanger on the site of the mighty Girvan Distillery, an hour from Glasgow and a mile from the volcanic island of Ailsa Craig. In the tiny, understated space of the original Hendrick’s distillery, were three stunning stills, one Carter-Head still and two Bennet stills. In the Bennet stills the botanicals are steeped, resulting in a rich and complex distillate. In the Carter-Head, the botanicals are in a basket within the still, through which the alcohol is steamed, resulting in a light and delicate distillate. On visiting this tiny, hidden away distillery in 2017, I found it difficult to comprehend how this globally renowned gin could hail from such a humble place. The newly opened Hendrick’s Gin Palace is profoundly well earned. Doubling the number of stills to six allows a hundred per cent increase in output for starters. But more than that, the cutting-edge new facility has a huge emphasis on research and development, allowing master distiller Lesley a state-of-the-art playground in which to exercise her genius.

Hitherto, Lesley’s expertise was bound to attending to the ‘curiously intellectual, detailed and deeply meaningful’ original Hendrick’s distillation, while a handful of limited-edition bottlings allowed her to flex her muscles at inventing cerebral and remarkable recipes. Orbium is the most recent, in which she takes Hendrick’s as its centre and then deconstructs the notions around how it is imbibed. Taking quinine, which is the main ingredient in tonic water (Hendrick’s and Tonic) and wormwood, the main ingredient in vermouth (Hendrick’s Martini), plus the distinctive Blue Lotus flower to create balance, Lesley created a gin ‘designed to open up previously unexplored dimensions of gin’. Its flavour profile is floral yet bitter, and is described as ‘ALMOST CERTAINLY not for everyone’.

Exploration is key to Lesley’s work. In 2014 she set off to the Venezuelan jungle where she lived for nearly two weeks with a tribe that had only been non-nomadic for three generations. There she set about exploring the jungle for plants and flavours. The only brief she gave herself was that the flavours had to fit into the Hendrick’s recognisable house style and she explored different terrains testing botanicals for new flavours. Scorpion Tail caught her imagination – green, floral and spicy (the exact flavour cues for Hendrick’s), met her palate upon crushing a leaf and tasting, so she set about extracting the flavour molecules and upon them standing up to further analysis she used a tiny alembic to distil in situ in the Venezuelan jungle. From this, the limited edition Kanaracuni was invented. Lesley chuckles telling me about the reality of living within a patriarchal tribal system and how on one occasion she asked one of the men in the tribe if she could have some water for distilling. What had eluded her, was that water-fetching was a task exclusively designated to the female tribe members.  The women of the tribe looked nervously between themselves, when lo and behold the man turned and fetched Lesley some water. The thought of starting a feminist revolution in the jungle tickled Lesley pink.

It is this exploration and drive for the new and exotic that is at the heart of the new Hendrick’s Gin Palace. Featuring a mysterious and enchanting walled garden which leads to a magnificent and imposing Victorian-inspired palm house flanked by two botanical hot houses, Lesley can cultivate a multitude of species of flora from across the globe in order to experiment even further with flavour.

Within the inner sanctum is Lesley’s laboratory and flavour library, in which she files her experiments. It also features a lecture theatre and experimentation bar, where industry members can learn and develop their skills. Tight lipped about what precisely she is working on, Lesley emphasises that her new Gin Palace will allow for the development of ‘a line of experimental liquids, some of which will hopefully develop into future releases and potential new expressions of Hendrick’s’.

0 comments on “Cool as a cucumber”