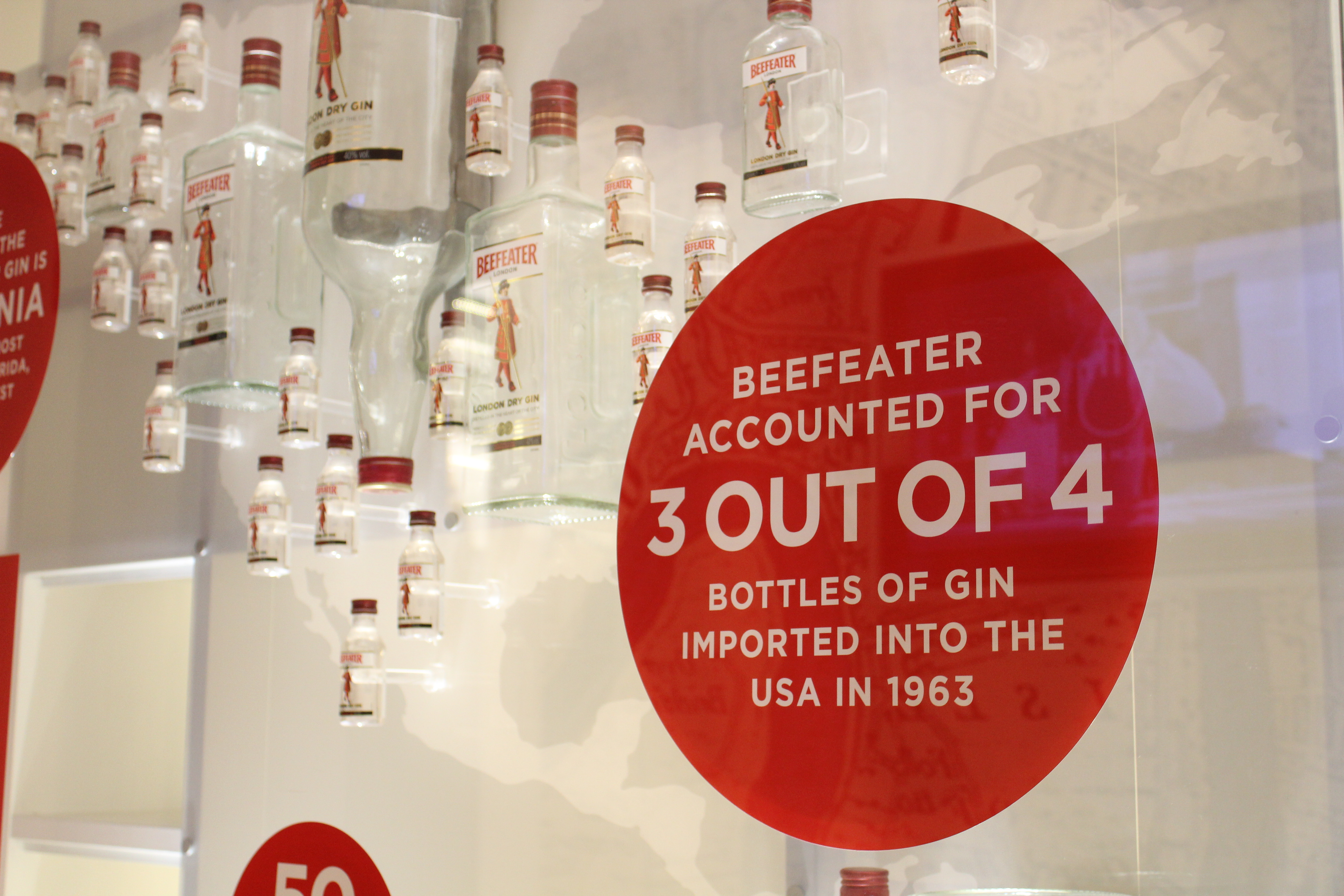 Do Brits take this great gin for granted?

“Three fingers of Beefeater Dry and just a promise of vermouth, on the rocks with an olive and a twist.” Not shaken, not stirred, just poured. It was the early 1980s and I was seven years old at the time, I had to spread my fingers out a bit to make sure that the portions were correct for what my Aunt called the perfect cocktail to drink while playing cards. I never felt so grown up as I did on those nights that I would spend with Aunt and Uncle in their apartment in western New York, mixing up cocktails. To me, this was what it meant to be a grown-up and I couldn’t wait to be one.

Flash-forward to the late 90s and San Francisco was just erupting with open kitchens, farm-to-table menus, and chef recognition. It was at this time that I donned my first white coat. There was a whole television channel devoted to food and wine. Cocktails, however, were still in the dark ages of bright colours and overly-sweet mixers. I got my big sous chef break in a large, noisy restaurant that boasted 15 line cooks and three different kitchens and I choreographed the dance nightly.

This was the era of the first dot-com boom, where servers walked home with hundreds of dollars in their pockets and sometimes they took pity on us poor back-of-house folks and took us out for drinks after. A Tom Collins with Beefeater – since I wasn’t buying – was my drink of choice, my Aunt’s voice in the back of my head. “Juniper and citrus…” she would tell me, “The true measure of a world class gin.” It would be a few years before those two flavours would have significant meaning in my career, but it was like she was helping me to draw the road map of my life.

One of these fateful nights, I found myself with some bartenders and manager types at the Bix restaurant, where I was introduced to the Negroni. I was  sceptical, until the seasoned man behind the bar reached back for the Beefeater bottle and I realised that this iconic brand was like knowing the handshake to a secret club. I worked in kitchens most days and picked up bartending shifts where I could; it paid better and it’s a lot like the hot line: recipes, balance of flavours, muscle-memory and quick orders, put together as fast as you can.

As the years went by, I moved to bar work full-time, witnessing the cocktail revolution from the behind the stick: fresh juice, forgotten cocktails, extinct liquors. I can still remember my first Aviation cocktail on a gin hunting trip to Seattle in the early 2000s. I happened to stumble into Zig Zag and took up a conversation with someone whom I later found out was none other than Murray Stenson, bartender extraordinaire, credited for bringing The Last Word cocktail back.

Everywhere I went, I could get Beefeater. Things moved quickly in those early days. Bartenders were the press’ new obsession and “craft” everything became the new buzz. It was easy to overlook what had always been there; big name brands like Maker’s Mark, Absolut, Patrón, and Beefeater became dirty words when entering the dens of the suspenders and mustached tenders. Everyone wanted the next big thing and to be the first one to know about it, and they wanted something local, regardless of whether or not it was good. This could have produced some dark times for the, “Only gin made with real London tap water”, but Beefeater, with its history and brand recognition, saw life in guests’ desire for a quality spirit that they were willing to pay for. The birth of the $10-$12 cocktail allowed bar owners to stock their wells with better spirits and Beefeater found its home all over the Bay Area’s menus as a house gin.

I thought I knew it all when it came to Beefeater. I was with them through the highs and lows, fought alongside them in the growing gin category, celebrated the arrival of the citrus and floral-driven Beefeater 24, and was there to be amazed at the pairing of Burrough’s Reserve and cheese (who knew, gin and cheese? Well, I thank the god Dionysus that master distiller, Desmond Payne, knew). When I stepped into Beefeater Distillery, getting up close and personal with their process, all of my previous ideas on this global juggernaut of a brand disappeared.

As the tour starts, you are greeted by eight inactive, large, copper rectifying stills: a reminder of days gone by when neutral spirits weren’t up to Beefeater’s current high standards and needed to be stripped before they touched a juniper berry. This stopped in the 1980s, as technology made it obsolete.

The current distillery is located in Kennington, London, and has been making Beefeater since the 60s. The same nine botanicals are weighed on the scales that James Burrough used when creating the recipe over 200 years ago. Nowadays, there are four men that work in the distillery to produce the juice: two for production

and two to make sure that everything is running smoothly. Four people to make approximately three million cases a year! They collect the gin in vats to be transported to Scotland by a man named Jeff every Thursday, where it is proofed and bottled. Botanicals macerate for 24 hours in spirit, before they are distilled and the copper pot stills start up at 7am and run for between five and six hours, depending on the ambient temperature in the distillery.

In terms of botanicals, the usual suspects are here: juniper, coriander, citrus peels, liquorice, almond powder, orris root, angelica root and angelica seeds. The latter taste a lot like dill weed on their own, but being able to hold and taste these raw ingredients whilst standing next to Still No. 12, where Mr. Burrough himself once distilled, makes it all seem a bit more magical. Desmond Payne put the famous still back into production after almost 100 years of being dormant in 2013 to create the only aged product that Beefeater makes: Burrough’s Reserve, which is rested in Jean de Lillet barrels. Now, it is also used to make the MIXLDN limited edition gins that the winners of the Beefeater’s annual bartending competition create with Desmond. These limited editions are sold only at the distillery and this year’s winner, Maxim Schulte, the newly appointed head bartender at The American Bar in the Savoy Hotel, adds Japanese sencha tea, lemon verbena, and raspberry leaf to the classic Beefeater recipe.

These limited gins help to drive interest in the Beefeater story, bringing old and new consumers into the family. One recent release, however, is projected to be the biggest product launch in the 44 years history of Beefeater’s parent company, Pernod Ricard: Beefeater Pink. The trend of rosy-hued gins is just starting to show up on our shelves and the jury is still out as to whether this growing European phenomenon will take root in America. The newest edition to the line-up was launched in the USA at the end of 2018 and is made using the distillery’s traditional botanicals; before strawberry is added after distillation – just like my Aunt adding her garden’s sunkissed strawberries to her Gin Rickeys.

With these new additions to their portfolio, Beefeater is showing the world that they can just as easily put out fun contemporary profiles, as they can their classic balance of traditional botanicals that everyone expects.

In my years working in hospitality in the US, there have been ups and downs, highs and lows, and trends that came and went, but a classic stands the test of time. Beefeater is the benchmark of what a true London Dry Gin strives to be. Let’s open the doors, make a few three finger Beefeater Martinis, and raise a glass to the legends that I’ve had the privilege to know; and when asked what my favourite drink is, I’ll channel my Aunt and say, “Why honey, the next one of course, the next one!”

0 comments on “Beefeater – An American Point of View”