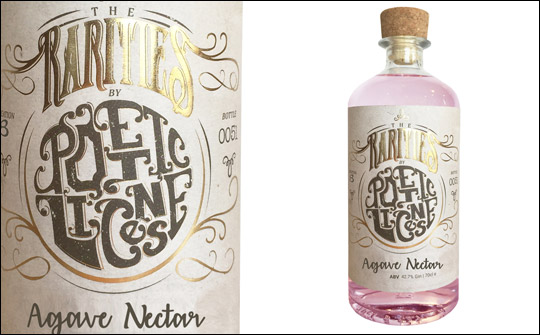 Agave Nectar Gin has been announced as the latest ‘Rarities’ expression from Poetic License Distillery.

The gin is a vegan-friendly alternative to the honey gin style and is said to take flavour-inspiration from Mexico, where most of the world’s agave is grown; it is distilled and infused with agave nectar as well as hibiscus which gives it its pink hue. This will be #8 in Poetic License’s range of limited editions, ‘The Rarities’.

Master distiller, Luke Smith, comments: “Agave nectar is a popular natural sweetener, often used as an alternative to sugar or honey in cooking. It is considered to be around one-and-a-half times as sweet but to still respect other flavours, allowing them to shine without modifying them in the same way, which is why I was so keen to experiment with it in gin.

“This is a sweet gin, but as this sweetness comes from an unrefined source it does not become sickly, saccharine sweet. We also used hibiscus in this gin which gives a floral yet slightly bitter note as well as the delightful blushing tone. Pepper makes the gin very aromatic and adds a lift of spice.”

‘The Rarities’ range launched in 2017, during which time there were four limited edition flavoured gins produced; an Orange Blossom in February, a Cherry and Basil in June and a Gooseberry & Elderflower in September and a Blackberry and Bay in October.

2018 has seen them create an Espresso gin, a Sweet Bell Pepper and Naga Chilli gin and a Tutti Frutti gin prior to this latest release. All their Rarities thus far have sold out within just a few days due to their ‘grab-it-while-you-can’ nature, the Tutti Frutti gin proved so incredibly popular they broke their own rules and made a second batch. It is anticipated the newest offering will be in similar high demand.