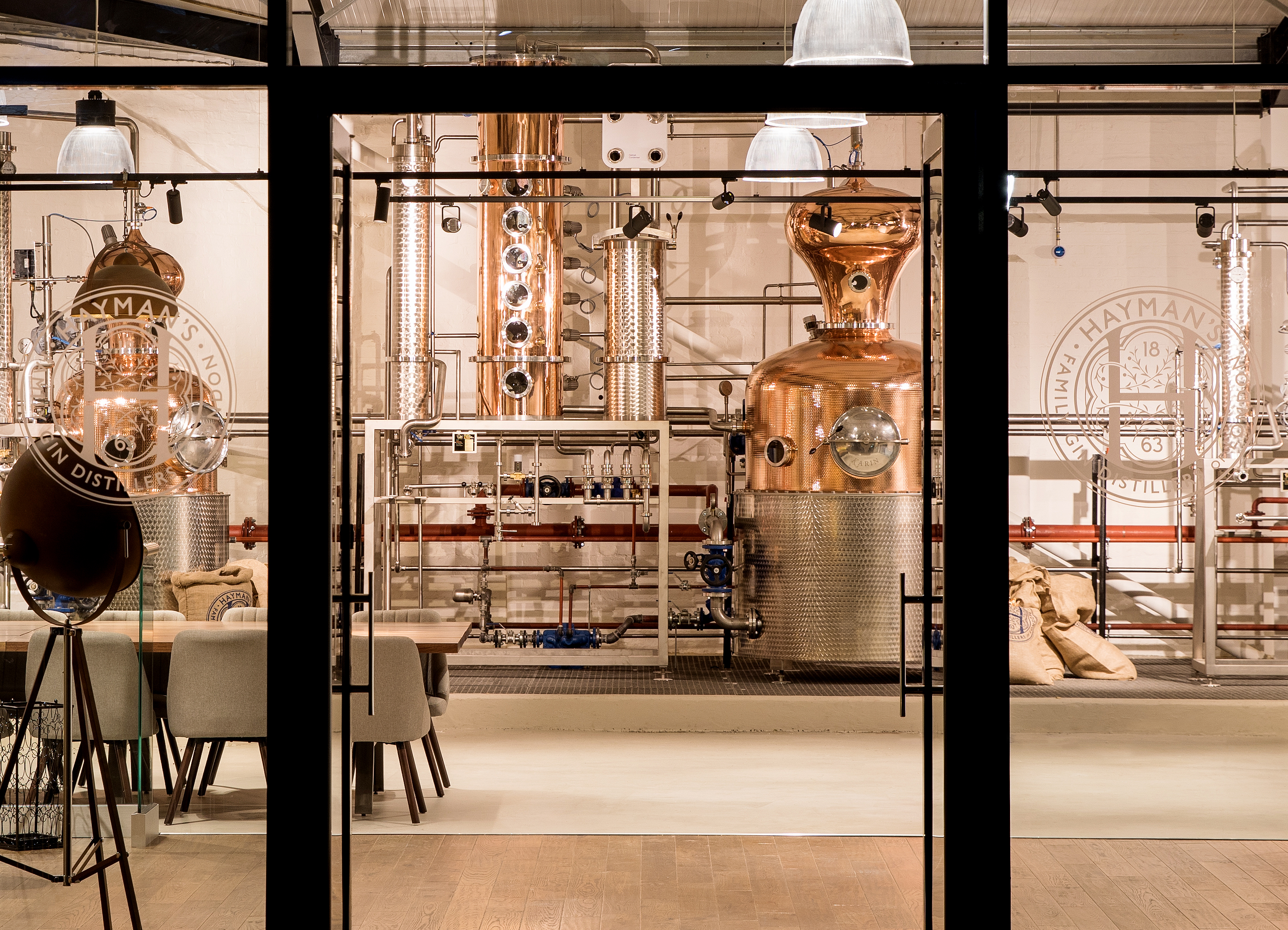 Hayman’s Gin opened its new distillery in Balham, London this year. Christopher Hayman tells us why

Christopher, can you tell us a little bit about the family’s history in gin?

My great grandfather was a gentleman called James Burrough. He was a pharmacist who went off to America and Canada before returning to the UK in 1863. On his return, he bought a drinks company that fitted into half the size of this area and started making gin. He made all different things too, we’re not sure but possibly toothpaste. But that’s why we also made pure alcohol. In October 1987, James Burrough the company was sold, it had just evolved. I was very upset about this, so I bought back the pure alcohol side and then gradually started bottling and producing gin. On one hand I was very sad about this, but on the other, it has allowed me to start the Hayman’s Gin, which came alive in early 2000.

What inspired the move to London?

As a family, we’ve always wanted to distil in London. Although we started Hayman’s Gin in Witham, Essex, my children (Miranda and James) and I always wanted to get back here. Two or three years ago, with what has happened in the gin market, we felt as though we were in a position where we needed to go into London. That was for a number of reasons, but mostly, because it’s where the family has always distilled gin. Why Balham specifically? We are about four miles away from where my great grandfather had his distillery. Finding property in London isn’t easy. We spent a long time looking around, but then we stumbled across this building. When we walked in here it looked far from how it does today – it was probably a shed. The mezzanine floor was here, that was a gym, but with the designers we had a vision to turn it into the home of Hayman’s Gin and into a home for London gin. It’s a gin palace with a modern touch.

Has the brand’s heritage been transported to the new site?

There are actually a lot of family objects here. That desk belonged to my great uncle, the cocktail cabinet was one of my wedding presents, there are pictures of my mother, father and grandfather. So we’ve tried to give it a touch of family, alongside the working gin distillery. A place to have a little bit of fun. We have three stills, the one on the left is Marjorie, which we moved from Witham, named after my mother. Then Karen, named after my wife and the one on the right hand side is Miranda, named after my daughter. My son will hate me, but there’s also a small still over there, an apprentice still made by John Dore. His daughter, goes, “Papa, it’s not fair, there’s one named after my great granny, my granny and my aunt, but not me.” I had this one cleaned up, we had her named Clodagh, after my granddaughter and I presented it to James.

With an iconic name like Hayman’s, do you get spotted by gin-lovers?

It’s not like that. I was in a supermarket the other day and spotted somebody looking at the gin. I asked whether I could help them and they said they were looking for a bottle for a wedding. So I said, “Well, actually there’s a very good bottle just in front of you called Hayman’s.” They asked what I knew about it, so I told them, “If you turn the bottle around, there’s a name on the back of it, Christopher Hayman… that’s me.” I was worried they’d just put it back, but they didn’t. I was known for my name in Burrough’s, but today I’m known in the industry with the Hayman’s brand. At one point it was only really Desmond (Payne, master distiller at Beefeater) who was known, meaning myself and Charles Maxwell (Thames Distillers) had a free rein.

What are all of your roles in the company?

I’m the chairman. James is the managing director of Hayman Distillers and Miranda is the marketing director. We work very closely together. I’m so lucky to be working with my children. We’re very gin-focused. I’m not getting younger, so James and Miranda look after this. Most of this new distillery was driven by James, with a few touches from myself and Jonathan Gibson, our head of marketing. They are the most incredible ambassadors for Hayman’s Gin. When the new distillery opened, my nieces and everyone offered great support. I learned my distilling at James Burrough, I spent three months in each department after university and then in various roles I nosed and tasted a lot of gin. I joined Beefeater while I was taking my finals at university. There was never any suggestion I’d join the family company. My father was an accountant, I wanted to be an accountant, so I went off to train as one. My father phoned me one night in my final year and asked whether I wanted to join Beefeater. Sam (Pembridge) looks after the distilling here today. We do regular tastings. I love doing them. You look at your gins over several months of productions and see if there’s any change, which the consumer might not notice, but which the distiller will pick up on. The only people who can change the recipe are myself, James and Miranda. It’s a family recipe, so changes are far from common. I’m very lucky though, I don’t think a day goes past, wherever they both are in the world, where James and Miranda do not talk to one another.

How would you introduce Hayman’s to those new to your gins?

[Joined by Tim Homewood, head of advocacy] Firstly we start by getting people to talk about gin, tasting it and nosing, which is really important. Getting people to identify the botanicals.

Homewood: In terms of the range, we have the core three products (London Dry, Old Tom and Sloe Gin). The star nowadays is our London Dry. Hayman’s Gin historically garnered a lot of favour because of the quality of its Old Tom. We make ‘True English Gin’ – we use traditional family recipes, over 150 years old and English gin making techniques, such as a two day distillation process. Balance is the key for us.

Hayman: That two day distillation is the family way. It’s what it is. We haven’t really tested any other way.

Homewood: All of our gins are made using different recipes with the same 10 botanicals. They all use neutral English wheat spirit. None of the botanicals are fighting for space with one another. There’s a juniper nose and a lemony freshness.

Hayman: People often ask me, “What does your gin taste of?” I just tell them – it tastes of gin!

Homewood: When I think of the current gin market, it’s all about massive impact. Ours is really subtle. Compared to those others, we’re much more of a handshake.

What’s the idea behind your campaign, “Call time on Fake Gin”?

Hayman: There’s a number of people who are stretching the definition of gin. I personally believe it has gone a little too far. We just want to bring it back a bit. Our family belief is that we’ll still be here in many years time. The EU definition of gin is that it’s juniper predominant.

Homewood: Essentially it’s about protecting gin’s future. I think there are a few that are maybe stretching that.

Hayman: It’s been really well received by the industry. We’ve gone to a wide audience and we’ve got retailers listening, distillers, wholesales joining the debate.

Homewood: We’re not trying to swoop in and be the juniper police. Let’s just look after it as a category for future generations. We don’t want gin to implode on itself. If we can get a re-inspection of the regulations that would be good.

Hayman: It’s not going to be easy though. A lot of people do want to – which is interesting. Everyone is trying to be unique with their gin, which you can understand.

What plans are there for the brand now that you’ve moved in? How do you see the gin category changing?

Recently has been the first time I’ve heard someone say that gin may stop growing. I don’t think it’ll collapse, but maybe it’ll slow down. Those who have found their niche are likely to keep going, but some people will stop I suppose.

America and Australia are interesting for gin brands. So is Germany. We distribute in China and it grows there each year. A lot of gin markets collapsed a few years ago, but a few of those are coming back too.

The important thing for us is establishing ourselves in the market place. We don’t want to go too wide of what we do. We might do some one-off specials, but they’ll always be related to our tradition. We now have tours here, where people get to taste our products and grind and smell some of the botanicals. We’re incredibly proud of what we’ve got here in our new distillery.