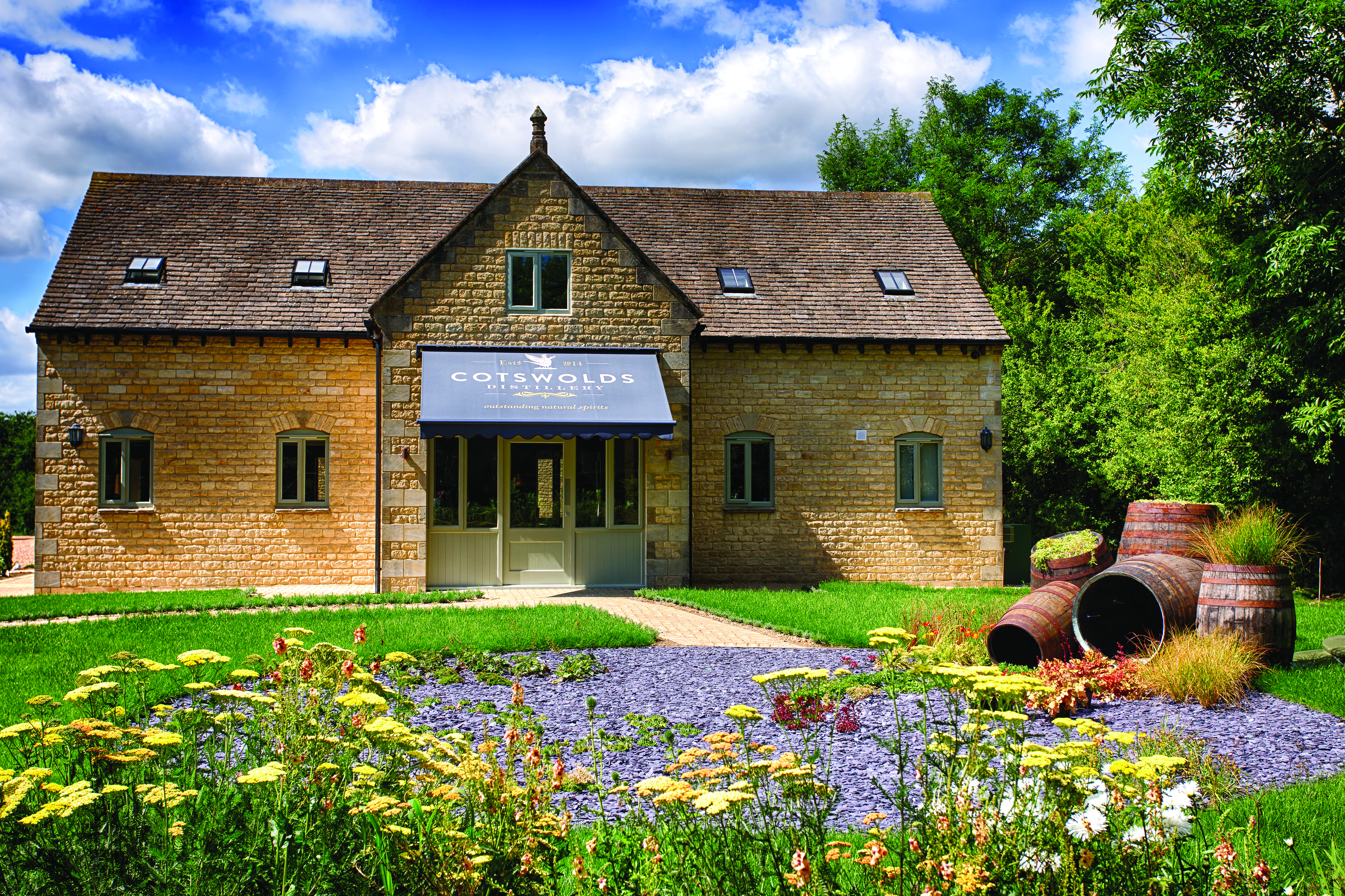 Gin; the great enabler. That’s probably a phrase not heard too often. How times have changed since Hogarth’s Gin Lane. What started out as financial prudence has turned into a local – and increasingly national – phenomenon at the Cotswolds Distillery. Dan Szor and his team began making gin so that their distillery could tick over while their whisky aged for three years. It turns out that this was an inspired move and their gin is now ready to go global.

Success has been sustained at the Cotswolds Distillery – in 2016 its Cotswolds Dry Gin was awarded Best London Dry Gin at the World Gin Awards, while in 2017 it picked up a silver medal in the same category. It looks as though it’s not just the rolling countryside and chocolate box houses that are beautiful in the area.

The man behind the distillery is founder and CEO, Dan Szor, a New York businessman who had been working in London’s heaving finance industry for many years. Dan took the decision, with his family, to leave the world of finance behind and move to the Cotswolds. While there, the idea came to Dan to combine his love of whisky with his ambitions to start a business. What better way of doing this, than renovating a derelict site near to his new home into a distillery. Dan put a team together and the doors to the Cotswolds Distillery opened in July 2014.

Fast-forward four years and while its whisky has now aged, its gin is more than just a means to an end. In many ways, the business model at the Cotswolds has set the template for others to follow. Central to this has been the picture perfect setting and the hordes of people who come to visit the distillery on a daily basis. They offer guided tours around its production areas, where visitors get to experience the process behind the gin (and whisky), before sitting down in a particularly cosy tasting room, adjacent to the shop, for a sampling of the full range of spirits and liqueurs. The tours run three times a day, seven days a week. To sum up their popularity, a quick attempt to book myself on to one reveals that there are only two spaces in the next month, with 30,000 coming each year.

Dan explains, “People want terroir! Some of the best advice I was given was to own your back yard.” This has meant that the good people of Shipston-on-Stour have seen Cotswolds Dry Gin and its sister spirits at local festivals and events since the get-go.

But the tour is only going to get such attention if the core product captures people’s attention. Like most things, that leads us back to gin. When coming up with the botanical profile of his gin, Dan and his wife undertook a range of blind tastings to discover which other products they liked. Dan tasked his distillers to come up with their own attempts, before putting them to the test with help from the food and drink scientists at Campden BRI. This aimed at creating a classic London Dry, something recognisably juniper-heavy and one that would stand up to tonic and not be drowned by it.

That recipe involves nine botanicals, with traceability and a local twist at the core. These include core London Dry favourites such as juniper berries from Macedonia, coriander seed from Morocco and angelica root from Poland. In addition to this are Egyptian bay leaves, freshly peeled lime and pink grapefruit zest, black peppercorn and cardamom seeds (which are both added at the end to give a hint of spice). The local twist comes from the addition of Cotswolds lavender from nearby Snowshill.

Essentially, it’s a gin that captures the very spirit of today’s gin boom – locality and honesty. In a touch of truth, often lacking in some quarters, Cotswolds proudly reveal that they source their neutral grain spirit (NGS) from Hayman’s. The base botanicals (juniper, angelica root and coriander seeds) are macerated for 15 hours overnight, before the rest of the botanicals are added in the morning.

Dan and his team speak proudly about the volume of botanicals they use in their recipe, suggesting they use about 10 times the average amount. The result is a richness of flavour and oily mouthfeel, due to the proportion of essential oils. Nick Franchino, head distiller, says, “This quantity ensures a really robust gin.”

It does make the gin standout and not just for its flavour. The oils present in the gin cause it to go from clear to cloudy when water is added. This glow, which is known as ‘louche’, is another aspect of the gin that Dan and Nick are proud of. Nick runs the stills slowly and cuts a large amount of the heads and tails. The hearts are rested for five days, meaning that all the flavours blend together. The gin is a one-shot spirit, meaning that once Nick takes the heart cut, it is just blended with water to bring it down from 80% ABV to bottling strength of 46% ABV. It doesn’t sound the most efficient means of producing gin, but it does mean quality. Nick remarks, “We’d tasted too many gins that we thought had suffered from being multi-shot, and we strongly believe you can taste the difference.”

To add a further level of traceability, it is also bottled on site.

The result is a juniper forward nose, packed with citrus flavour. The lavender lets you know it’s there with a subtle fragrance that compliments the lime in particular.

So what’s next? Besides the whisky, stepping into the lab located above the bottling line is an introduction into a world of experimentation and alchemy. While it seems as though the Cotswolds Dry Gin will continue to thrive, the team have produced a few new twists, including Hedgerow Gin, Cotswolds Summer Cup, 1616 Barrel Aged Gin and more recently a Herb gin, exclusive to its on-site shop. In a partnership with That Boutique-y Gin Company, there was also the release of Double-Barrelled Gin, aged in both first fill ex-Bourbon barrels and ex-red wine casks.

On a business front, there has recently been the introduction of a local retail outlet in Bourton-on-the-Water, a debut into travel retail at Birmingham airport and plans to expand the visitor offering with a café.

So while Dan Szor may have left the world of finance behind, let’s hope he wasn’t seeking the quiet life, because with great gin flowing off the stills, life is about to get even busier at the Cotswolds Distillery.

While the louche of the Cotswolds G&T is exciting enough by itself, Cotswolds Distillery’s head of mixology, Oliver Morris, has created a number of serves, including these beauties below:

The nutmeg note of Cotswolds 1616 Barrel Aged Gin and the ginger liqueur go well together to create a fresh spice that can be made more intense with a fiery ginger ale.

• Top up with ginger ale or ginger beer

Place the gin, liqueur, lime juice and triple sec in an ice-filled shaker and strain into an icy copper mug. Top up with ginger ale and serve. Garnish with mint, lime or ginger.

With grapefruit zest in the botanical profile of the Cotswolds Dry Gin, the fresh juice draws out the citrus, while the Cointreau offers orange sweetness. Bitters balance between the two.

Place all ingredients in an ice-filled shaker, shake and strain into a chilled Martini glass. Add dashes of the Grapefruit bitters. Garnish with grapefruit peel.

An orchard delight combining notes of honey, herbs from the Krupnik and a sweet fruitness.

Place the ingredients in an icy shaker. Shake and strain into an ice-filled Copa glass and serve. Apple crisp and honeycomb make a perfect garnish.

0 comments on “At first, there was gin”