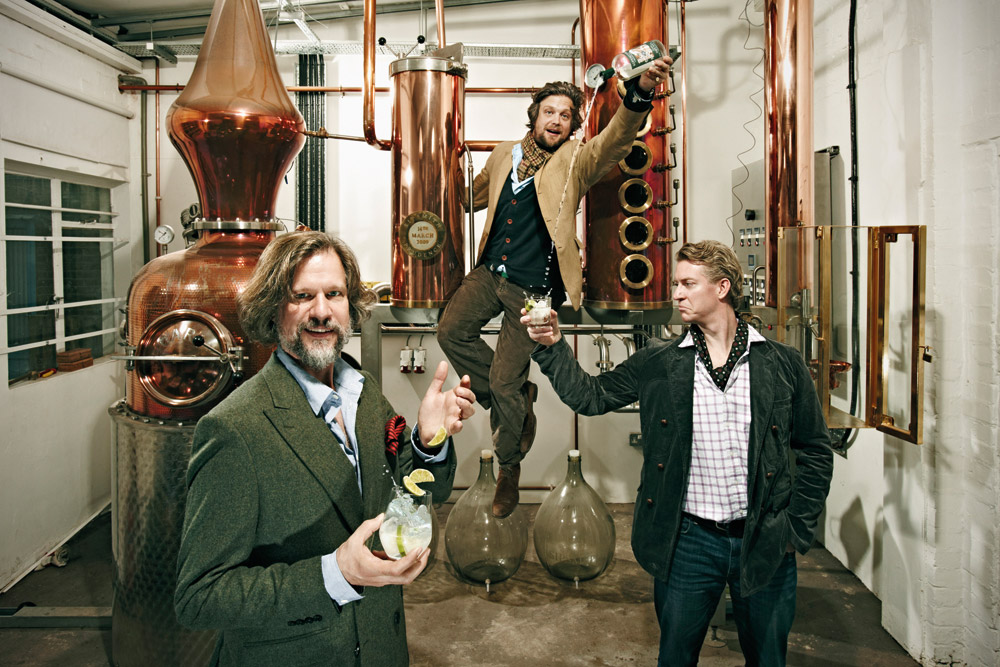 It’s a bright and fresh morning in London, following a night celebrating at this magazine’s Icons of Gin awards. That evening I had the pleasure of meeting
Jared Brown, master distiller at Sipsmith Distillery. Strikingly thoughtful and clearly possessing an abundance of knowledge, we make plans to meet at the distillery the following morning.

The Sipsmith story took its first steps in 2009, based out of a small workshop in Hammersmith, London, once home to whisky expert Michael Jackson. Since 2014 it has sat proudly in larger lodgings in Chiswick. It’s outside this new residency that we meet.

It’s remarkable how in just nine years, a brand started by two friends, Sam Galsworthy and Fairfax Hall, is one of the standout features on many back-bars. Jared Brown, who as a drinks historian has written on cocktails and spirits, met Sam and Fairfax in 2007. Talking about distilling in the US, Brown discovered their mission to distil a gin in London. Brown laughs, ‘They were only missing a distiller, and I was only missing them. I decided I wanted to work with Sam and Fairfax was when I discovered they were at least as staunchly traditional about how this spirit would be made as I am.’

That mission statement rings true today; to create a London Dry gin in London. The process has seen them become the first traditional copper pot distillery to open in London for 189 years, and also change the face of gin production in the UK. Not a bad track record.

To create this spirit, Brown looked at how gin had traditionally been made, ‘We reached back to one volume that I had got from 1738 of thereabouts, distilling with just one ingredient – juniper… I worked up to the 1860s, and there were a dozen gin styles in one book. Today we only really name three: London Dry, Old Tom and Plymouth, but they had Table Gin, Cordial Gin, Fine Cordial Gin, Cream of the Valley, West Country Gin etc. We made them. We tried to understand what Dry Gin was in an historical context and how it differentiates, and admittedly, there are a couple of balance notes in the Fine Cordial that have crept into our London Dry. That was how we set the formula.’

In a world that demands constant newness, there’s something special about a brand that takes such pride in its London Dry. Each of the Sipsmith products is made in the one-shot method, while botanicals in its London Dry Gin include Macedonian juniper, Seville orange peel, Spanish lemon peel, cassia bark from China, Madagascan cinnamon bark, coriander seed from Bulgaria, Spanish ground almond, angelica root, orris root and liquorice root. The result is a citrus-forward, smooth gin, that sips well on ice or mixed into a G&T. ‘I use the two citrus peels plus the coriander because the citrus peels pop in the foretaste, while the coriander pops in the finish, bringing a little grassy note. The cinnamon and cassia is more complex and brings heat, but working with both brings balance. I was taught that Angelica is flavourless and merely binds, but the plants in my garden would argue with that – they are remarkably flavourful.’

‘We have had a lot of people come in and say, “Oh, you are not doing anything different.” For our formula, we looked around for a reference point, a benchmark gin, but we quickly discovered that everyone had modernised and industrialised. So in the absence of a benchmark, we set out to make one ourselves. Not to innovate, but if you took a graph of a classic London Dry, we wanted to end up as close to the centre as we could. That would give an understanding of the birthplace of gin; of what was born here and what should always be here.’

As the demand grew, its capability needed to follow suit. Introducing Patience, a still gin lovers owe here a great deal of gratitude. A distillery’s legal documentation and HMRC concerns don’t tend to excite consumers, however we should be thankful that Sipsmith challenged the Gin Act of 1823. Brown elaborates, ‘The act was structured in such a way that if you were under 1,800 litres, HMRC could deny you a licence off-hand and the appeals process was nearly impossible. With Sam and Fairfax, the near impossible is possible and so they went after this Act, which nobody had since 1823. Everyone had just given up and either purchased a big still of didn’t distil. Sam and Fairfax kept bashing heads against it, so finally they got answers like, “We are not going to give you a license because no one alive knows how to issue one.” So they helped with that, got them in touch with Scotland and found someone who had an issue and then we got the paper.’

That bit of paper would pave the way for many of the producers we enjoy today to begin their craft, and a number of distillers I’ve come across are in no doubt as to who they owe thanks to. Brown laughs, “There are over 500 licences issued in Britain since that point, on the basis of that legal work and so it’s been a wonderful feeling to know that we kicked that door open.”

The brand’s stills all reveal a little of their story. Prudence, designed with Germany’s Christian Carl, was so named because the then Chancellor of the Exchequer Gordon Brown was extolling the virtues of prudence, while owners Sam and Fairfax were selling their homes to fund the still.

Patience was named because initially they could only afford the bottom half of the still, which proved enough to allow them to run a maceration while distilling on Prudence. Brown says, ‘That effectively doubled up our production on Prudence, because as soon as that batch was done, we could pump the other batch in.’

On moving into its current site in Chiswick, in came the biggest of its stills, Constance, which solely works on the classic London Dry. ‘She’s tasked with making our London Dry with perfect constance’, Brown says with pride. There is also the smaller still, Verity, so named following Brown’s research into Latin term for truth – veritas.

This search for the true London Dry has proved the building-blocks for its subsequent releases. With that London Dry at its heart, the Sipsmith core-range consists of: V.J.O.P, its juniper-led 57.7% ABV offering, a Sloe Gin that really deserves to be enjoyed neat, Lemon Drizzle Gin, which has a sweet palate full of bright citrus, London Cup, the distillery’s take on the traditional gin cups of the 1800s and its Sipping Vodka.

For a brand that has tradition as its core value, innovation is never far away. Ollie Kitson joined Sipsmith in 2014 as head distiller. Jared discovered that while Ollie was excellent at production, ‘He has also got one of the best palates that I have encountered in years.’ This inspired a series of experiments from the distillery that today forms its ‘Sipping Society.’

Members of the Sipping Society join up and receive two experimental gins every other month. Brown explains, ‘The early experiments sold out in a couple of days. People get to try the best of our experiments. It’s certainly not limited to Ollie and I, because there is a whole group of people with great ideas.’

The members of the Sipsmith team gather to create these experiments at the on-site bar once a month, with little more to it than, “Get behind the bar, make friends, have fun…” The results are proudly displayed on the wall in the distillery.

Through the Sipping Society, gin-fans get to see the flavour combinations and experiments that get distillers excited. However the London Dry Gin remains close to Jared Brown’s heart, ‘If you asked me which of all our products I love the most, which I am most proud of, it’s that one. We have some great experiments but it’s come out of that – that is the parent of all of these.’

That’s not to say that the experiments go no further. Lemon Drizzle Gin started life as a Sipping Society release before its full launch. ‘Inevitably we get the question of “Oh, this is amazing, are you going to be releasing this?”

It was announced in 2016 that spirits giant Beam Suntory would be taking over Sipsmith, but fans need not worry that this will mean an end to the experimenting. Brown insists, ‘We will always be pioneering and pushing the boundaries of what’s possible with gin and continue to make extra-great liquid if we can.’