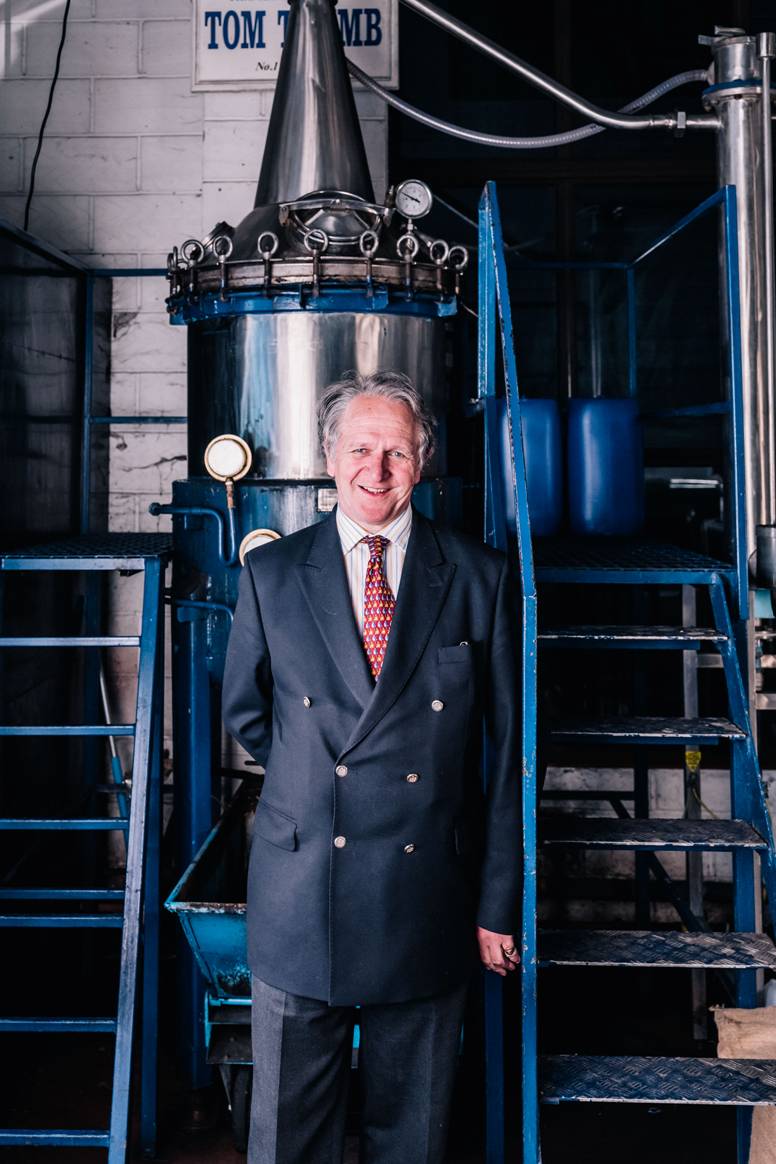 Charles Maxwell of Thames Distillers on the business end of gin

When you buy a bottle of gin, do you give much thought as to where it came from? A small distillery nestled in green hills next to a sparkling river, perhaps? Or sitting proud on the wild coastline from whence the brand gets its marine-based botanicals?

While this could be true, the very opposite is also possible. Because one of the less well-known aspects of the gin world is contract distilling, where an individual or company commissions a distillery to help them develop and make a product that they can then sell.

The leader of the pack when it comes to contract gin distilling is Charles Maxwell and his Thames Distillery. Located in a nondescript industrial estate in Clapham, this isn’t the realm of green rolling hills. This is the business end of the industry.

There’s still romanticism here, however. Charles is the latest in a long line of distillers, which dates way back to the 17th century. ‘My eighth great-grandfather was apprenticed in 1688. From that day to this we’ve been distilling gin in London,’ he explains as we sit in his work-worn office.

Maxwell himself is tall, with wiry gray hair and glasses worn low on his nose, a mildly mad professor in looks, with a friendly demeanour and wry sense of humour.

We’re surrounded by bottles of gin – they’re crowded on windowsills, the tops of filing cabinets and tables, and Charles sits at a cheap MDF table piled with papers and a laptop.

Below the office is a noisy bottling line chugging round, while outside in the yard, gin sits in huge plastic containers, brand names scribbled on them, waiting to be driven and occasionally shipped to customers. It’s in another smaller building across the way that the alchemy happens, where two 500-litre stainless steel stills called Tom Thumb and Thumbelina sit, awaiting their next run.

Rocky road
With the gin boom, he says, business is good. But it hasn’t always been this way, with Charles and his family navigating a rocky patch that lasted 50 years.

Back in the 1960s, his father was facing a difficult decision. As the chairman of the Finsbury Distillery Company, the family’s company that was founded in 1740, he looked around the boardroom table and realised that with one other exception, everyone was over 65.

‘They did some calculations and realised that if they didn’t find somebody to get married to, we would end up being forced sellers because there wouldn’t have been enough cash around to pay the draconian inheritance tax of the time,’ he recounts.

Finsbury Distillery Company was amalgamated with Matthew Clark,
which ended up being a relatively good fit for everyone.

Joining Matthew Clark in 1976, Charles worked in numerous parts of the business, learning the ropes. He had to fight his way in, however, as his parents were less than enthusiastic about the idea of their son joining the drinks industry.

‘My father said when I left school, “You are not coming into this”. I went off to train as an accountant [for] nearly six years. Towards the end of it I looked at my father and said, “If this is what business is about I’m going off to grow trees, because I can’t see myself doing this for the rest of my life. I think I’d like to come into the wine game.” He said, “No, you can try other things,” so I said, “Well I’m interested in motor racing.” My mother’s face blanched at that,’ he laughs. ‘They just said, “Don’t you ever say we forced you into it.”’

By the time the 1990s came around,
Charles was a director of Matthew Clark, and unhappy with the direction that the then chief executive was taking the company in. He left in 1992, leaving behind a company his family had been involved with for 250 years.

New beginnings
He wasn’t out of the game for long, however. The very next week Charles was buying distillation equipment from some administrators. He tried to make a go of contract distilling, but found themselves selling a few years later. ‘We sold out in ‘95 precisely because the gin market was where it was,’ he recalls.

Fortunately for him, the new owners of his distillery were cowboys who ‘took HM Revenue & Customs for quite a considerable ride’ before disappearing. So, it was in 1997 that Charles found himself buying all his distillation equipment back off the administrators.

‘[From 1997] we went through 10 years of pretty tough trading. But by 2007 the green shoots on my new gin tree were beginning to show through. From that day to this, the last 10 years have been a lot easier and a lot more fun.

Boom time
Nowadays, gin has caught the public’s imagination, and it seems as if the world and his wife want their own gin brand. ‘If we don’t get an enquiry every day, it’s a quiet day,’ Charles explains. ‘We just passed our 130th recipe which we have developed and got to refinement stage.’

With two new finished products sitting waiting to be bottled and another 10 at various stages of development, it looks as if gin fans will have plenty of new products to explore for some time to come.

As for Charles’ plans, it looks as if he’ll be keeping Thames Distillers in the family, when he does decide to retire. ‘My son is in the trade in the far East. There is a plan that in a couple of years he probably will return to UK shores. He’s going to come and tell me how badly I’ve been running the company,’ he chuckles. ‘His sister could end up being involved in the marketing and PR. We shall wait and see, but at the moment, I’m just going to kick the ball along the way.’

With such a long and storied history in the industry, it’s no surprise that Gin Magazine has made Charles its first Hall of Fame inductee. The Gin Guild also decided to award Charles its inaugural Lifetime Achievement Award in 2014.

‘There was somebody else we lined up to receive it that year,’ he recalls. ‘For whatever reason, they couldn’t be at the event. I went to the dinner and I was sitting there with my wife, and the speeches had started, suddenly I thought, “Hang on, what’s going on here? What?” I realised that I had been completely Shanghaied. it was a lovely moment.’

From the tough times of the 1990s when nobody was drinking gin, to the golden
age of today, one thing has been constant in the gin universe, and that is Charles Maxwell’s complete dedication to his craft, helping prospective new gin producers to navigate the choppy waters of recipe creation. Our spirits shelves are a lot brighter as a result.

Charles Maxwell was announced as the first inductee of our Gin Magazine Hall of Fame at the Gin Magazine Awards dinner on February 15 2018.