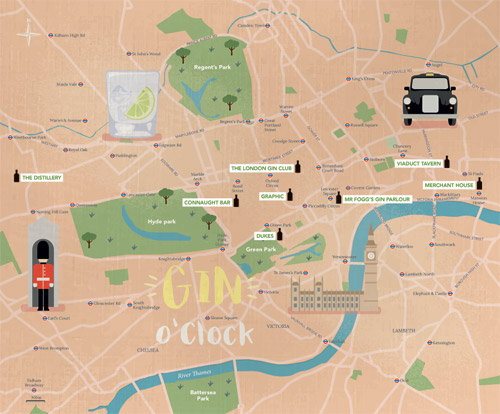 From gin experiences to the best cocktails, there’s a gin bar for every occasion – here is a selection of the best in London.

Ah London, one of the leading cocktail cities of the world, where the bars blaze a trail,
leaving others following in their wake. But what of its gin bar credentials? Unsurprisingly, these are top notch too. London’s links with gin run deep. Ever since soldiers brought Genever, a precursor to gin, back from Holland in the 16th century, the spirit’s place was secured in Londoner’s hearts.

When Parliament passed the Distillers Act in 1690, declaring that anyone could make their own spirits, it resulted in one in four homes possessing distilling equipment.
This led to the gin craze era of the 18th century, which was captured by William
Hogarth in his Gin Lane artwork, depicting the levels of open drunkenness and
depravity that were apparently to be found on the city’s streets.

Fast-forward to today, and everything is slightly more under control. So why not
head out to one of the following haunts for a sophisticated spirituous experience?…

Mr Fogg’s Gin Parlour
1 New Row, London WC2N 4EA
mr-foggs.com/gin-parlour
Walk up the stairs out of bustling Covent Garden into a chintzy world of yesteryear, complete with oriental wallpaper, swagged curtains and twee oil paintings. As the name suggests, this is a bar ‘owned’ by fictitious globetrotter Phileas J Fogg, and as such the space is a carefully crafted, relaxing gin parlour that hints at Fogg’s exotic influences. The gin list (‘Encyclopedia Gintonica’) is impressive, drawing on products from around the world such as Ferdinand’s Dry Saar from Germany and Broken Hear from New Zealand. The cocktail list leans heavily but not exclusively on gin, with original creations like the light, refreshing Passepartout (Hendrick’s, lemon juice, sugar, black pepper and cucumber air), and a strong list of classics.

Merchant House
13 Well Court, London EC4M 9DN
merchanthouselondon.com
This subterranean drinking den in the City specialises in both gin and rum, with about
200 gins on offer on the back bar. Sink into a leather chesterfield, enjoy the jazz and
swing on the stereo and order a Martini served in an iced glass – mine is made with
Four Pillars gin from Australia. Their cocktail menu is inspired by the ‘key trade cities of
the European empires’. The Jemadar looks to Kolkata, India, which was the East India
Company’s headquarters in 1772, and the centre of the merchant’s opium trades, and
mixes house-aged gin with spiced tamarind, tonic and opium bitters for a spicy, more concentrated take on a G&T. The venue offers masterclasses of gin, rum or both; small groups can sit at the bar, bigger groups can have a private area. Oh, and fancy-pants
liggers who love oysters should order the half-dozen for a reasonable £12.

Viaduct Tavern
126 Newgate Street, London EC1A 7AA
viaducttavern.co.uk
A list of London’s best gin bars wouldn’t be complete without a Victorian gin palace. As Charles Dickens wrote of these palaces, ‘The primary symptoms were an inordinate love of plate-glass and a passion for gas-lights and gilding… All is light and brilliancy.’ Staying true to historical form, the Viaduct Tavern emits a welcoming glow within its ornate environs, from its decorative ox-blood red ceiling to the gilded frescos and mirrors on the wall. They take their G&Ts seriously here, hand-carving ice from a huge block. For
the more adventurous, check out the staff’s ‘ginfusions’ – their favourite gins infused
with other ingredients, such as Hendrick’s with grapefruit and tarragon. It’s a popular
haunt with the local City workers, so be prepared to stand in the busy period post-office
hours.

The London Gin Club
22 Great Chapel Street, Soho, London W1F 8FR
thelondonginclub.com
This cosy Soho bar is the place to come to learn everything you need to know about gin.
Located in a wood-panelled room plastered with vintage tin adverts, they have a huge 370 gins, but they’re not for show. Ask about any and you’ll get told about the people who make it, where it’s made, and the botanicals used… but in a fun, informative way rather than as a geek-fest. Learning that I like Gin Mare, proprietor Julia Forte suggests Salcombe gin, another savoury gin that they serve in a G&T with a thyme and juniper berries garnish. It’s perfect. Those who sign up as members online for free are offered money off the myriad tasting menus available, and are kept up to date with new products and events.

Dukes
35-36 St James’s Place, London SW1A 1NY
dukeshotel.com
An old haunt of James Bond creator Ian Fleming, the Martinis at Dukes are legendary. It may be situated in a five-star Mayfair hotel, yet it still manages to ooze a cosy, lounge-y
atmosphere where you’ll happily dawdle in one of the velvet armchairs for hours.
Presided over by charming head bartender Alessandro Palazzi, his Martinis are crisp and super-chilled, with the gin or vodka poured straight from the freezer into a frozen glass,
meaning that no shaking or stirring is required. A few drops of vermouth here, a spritz of lemon zest over the top there, and voilà – your drink is served.

Connaught Bar
Carlos Place, London W1K 2AL
the-connaught.co.uk/mayfair-bars/connaught-bar
With its marble and mirrors, the drama drips from every nook and cranny of the Connaught Bar. The star of the show is sharp-suited Agostino Perrone and his Martinis. Wheeling his decadent Martini trolley up to your table, he presents a number of tinctures for you to smell and choose from to add to your drink. If you want my advice, go for his suggested mix – a hefty dose of Tanqueray 10, the Connaught’s house blend of vermouth and his own Dr Ago’s bitters – then sit back and watch him pour the drink from a great height, flexing the lemon zest down the crystal-clear arc of water in the most balletic of gestures. Fabulous.

The Distillery
186 Portobello Road, London W11 1LA
the-distillery.london
A building with a gin distillery and museum, two bars and hotel rooms – hat more could
you want? That’s right, the team behind Portobello Road Gin went the whole hog and
opened this beautiful building in Notting Hill last year. On the first floor is the airy
Gintonica, a bar/restaurant inspired by Spain’s love of G&Ts served in copas. It has
100 gins on offer, and a lovely tapas menu to soak up the booze. Head to the basement,
and you’ll find the Ginstitute, a museum full of historical paraphernalia, where ticket
holders are given a fascinating lesson in the history of gin, accompanied with four
delicious cocktails, before heading into a blending room to make their own. It’s £120 a ticket, and you’ll receive a bottle of your gin blend, plus a bottle of Portobello Road Gin.

Graphic
4 Golden Square, Soho, London W1F 9HT
graphicbar.com
Hip Graphic is a gin bar institution in London. From the street-art alphabet shutters to
the concrete shelf back bar, it’s buzzy and fun. With roughly 300 gins on the bar there’s
plenty on offer, and the team likes nothing more than coming to speak to you about your
taste preferences before knocking up a bespoke Martini. What Graphic really specialises in, however, is bringing gin lovers together with their events. Their monthly Gin Socials sees a gin brand’s distiller or brand ambassador give a talk (tickets are £5, and include a G&T, gin tasting and a cocktail), while their regular Gin Off competition sees four brands battle it out, creating their own cocktail that the crowd gets to try and then vote on their favourite (tickets are £10, including four cocktails).