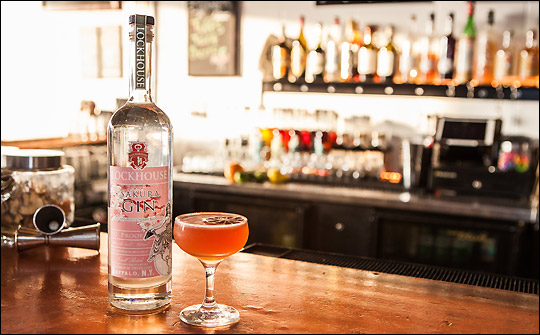 It’s a spring morning in Buffalo. The sun is barely peeking over the horizon. Cory
Muscato is out in the park with a small handheld vacuum cleaner thoroughly scouring
the ground for fallen cherry blossoms. In a short few hours, those blossoms are going
to be sitting in a gin basket at Lockhouse’s downtown distillery.

‘I really hope that it’s apparent that we’re trying to make our personality as a
company – as individuals to come through in our products,’ said Lockhouse Distillery
operations manager and brewer turned distiller Cory Muscato. Wearing a floral palm tree adorned t-shirt, he leaned over the table, sipped his beer and laughed. His enthusiasm for Lockhouse Distillery’s four gins, the distilling process and his hometown
of Buffalo, New York are infectious.

Lockhouse Distillery opened in 2013. It was the first operational distillery in the city in over 80 years, since American prohibition eradicated the once thriving industry.
Buffalo, New York was once one of the most important grain ports in North America, the
evidence still visible along the waterfront where monolithic grain silos stand like
sentinels. Two million bushels of rye, barley, wheat and corn were processed daily at its
peak near 1900. The Buffalo Corn Exchange has long since closed its doors, but Buffalo
has reemerged as a different kind of grain hub. 26 breweries and six distilleries, Lockhouse included, now call Buffalo home.

THE DISTILLERY AND THE SPACE
All four of Lockhouse’s gins are distilled from 100 per cent New York corn on a pair
of quirky custom built multi-functional 80-gallon stills. ‘Originally it was a column
still,’ Cory said, ‘and then through a bunch of trials, I took off the dephlegmator, so I
guess it makes it a pot still which is shaped like a column.’

Although it may sound unusual, Cory wouldn’t have it any other way. He describes it as ‘romantic’ when talking about the terroir of their setup. ‘It’s so individualised and personalised… the shape of the boiler, the column, even the composition of the
metal in the still.’

Lockhouse uses a gin basket and vapour infusion for the botanicals in all of their
gins. Given the small size of their pot still, Lockhouse blends the results of several runs to ensure consistency. The gins mellow for a week in a stainless steel tank before bottling,
‘the oxidation process helps,’ Cory adds.

On the other side of a garage door inside the distillery is a bar that’s the first of its kind and serves as Lockhouse Distillery’s tasting room. The bar only serves New York produced beer, wine and spirits. You’ll find all six of Lockhouse’s flagship products, which include two of their four gins.

LOCKHOUSE’S FOUR GINS
Launched in 2013, Lockhouse’s Fine Gin once shared a common base spirit with their
wine grape based vodka. Their vodka has residual character and sweetness because it
is distilled from grapes. Three months after launch, the team went to a base of 100 per
cent corn.

Lockhouse Distillery’s flagship Fine Gin is a study in the team’s enthusiasm for
experimenting with botanicals. Botanically, it includes juniper, coriander, fresh peeled
orange, angelica, sage, grains of paradise, cardamom, cassia and marshmallow root.
‘If there’s something I don’t know or haven’t tried, I just rush towards it,’ Cory said, ‘that’s what brought me to marshmallow root.’ They started by tasting 30 botanicals macerated in their house spirit. When he tasted the marshmallow root, ‘I loved it and it made its way into the final batch because it had that little sweetness, little woodiness, without that bitterness that angelica has.’ Today that botanical library is up to 193. It takes up nearly an entire wall of their downtown Buffalo distillery space.

The marshmallow root does gently shine through in their Fine Gin. A self-described ‘contemporary style’, it was designed for cocktails and to be a versatile base spirit behind the bar.

Lockhouse does not filter their Fine Gin, and early on the team struggled with
consumer perceptions of cloudiness or louche in their gin. In fact, the 41.5% ABV
was chosen because that was the lowest ABV at which it was clear in the bottle.
‘Over the last century people have been really geared towards filtering. People really love that word. They think that words means hygienic, they think it means medicinal. They think it has health benefits. If you see a cloudy gin on the shelf, buy it! Because that means there’s so much flavour in the bottle, the alcohol can’t contain it.’ But still Cory admits that with his own product, it ‘made it tough to be a Martini gin.’

Lockhouse’s Barreled Gin breaks with convention a bit in the aged gin space.
Lockhouse both rests their gin for longer than most other distilleries and uses new
barrels. While their first batches spent a total of four months resting in small eight, 10 and 15 gallon barrels, their current batches are spending well over a year in ‘new char #3’ 30 and 53 gallon barrels. Next year Cory says, ‘we’re hoping to have nothing less than
two years, that’s where we’re going to stop.’

The botanical blend of Lockhouse Barreled Gin is different from their Fine
Gin. It features an increased focus on the herbaceous and floral botanicals, so lavender is dialled up quite a bit. Lemon replaces the orange from their fine gin, and goes along with juniper, coriander, a touch of ginger, and some cardamom for added brightness. The wood notes certainly are aggressive in their aged gin with lots of vanillin and oak early, the finish blossoms with a surprising floral lightness, especially for an aged gin. Designed to be sipped on its own, it works well both neat and on the rocks.

Buffalo, New York’s park system was designed by Frederick Law Olmsted, of New York City’s Central Park fame, boasts an impressive Japanese Garden rife with a great number of cherry trees. A couple of years ago Lockhouse reached a deal with the park’s conservatory to collect the blossoms for Lockhouse’s spring seasonal Sakura Gin. ‘I couldn’t take them off the trees, I had to wait until they fell,’ Cory says, ‘and every morning at 6am before distillation I would have to go pick them off the ground.’

But all the time in the field was time consuming and labour-intensive. ‘I got one of those 1990s handheld vacuums that’s shaped weird… and I vacuumed them off the ground,’ he paused adding, ‘just a gentle suction.’ He would take the blossoms back to the distillery and gently clean them. Each batch takes about two cups of these blossoms, ‘packed like brown sugar.’ Sakura Gin also features another unusual botanical to contrasts with the cherry blossoms: shaved coconut meat ‘to give it some umami character.’

Sakura Gin is an annual limited-edition release, put out each spring after the Cherry Blossom Festival. In 2016 there was only enough blossoms to produce about 2,000 bottles, which sold out in weeks. It’s an absolutely stunning spirit with impressive balance. Despite cherry blossoms at the fore, there’s a slight citrus character and an easy spiciness from the cubeb berries that complements the juniper. With every bottle sold, Lockhouse Distillery donates to the Buffalo Olmsted Parks Conservancy for vacuuming privileges.

Lockhouse Distillery produces one more private label gin exclusively for Buffalo cocktail bar The Angelica Tea Room. Cory approached them with a concept built around the eponymous ‘prolifically used botanical’. Angelica Gin was designed to be a house pour for the cocktail bar, although heavy with angelica, Cory described it as ‘more of a London Dry style,’ taking a more classic and accessible approach that can work in nearly anything.

What’s next for Lockhouse Distillery is to continue focusing on their line of flagship products, their four gins, and maybe trying a few things that others haven’t yet. ‘We don’t want to follow the script. Everyone’s focusing on base spirits, we’re focusing on modifiers. Something you’ll add to the cocktail, that’s a modifier.’ Next time you make a Negroni with Lockhouse Gin, perhaps you’ll reach for their Ibisco Bitter too.